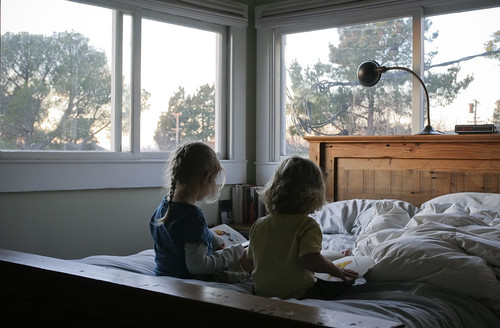 We’ve turned a corner.  He is now “mock reading” alongside his sister.  They spend minutes on end like this.

Sure, he’s also still running around in circles, slapping his behind, chanting “shakeyabooty.”  More frequently than I would like, he succumbs to his temptation to try to swat the cat.  He has a coiled spring-like energy inside him, and when you pick him up under his armpits, and he automatically raises his legs forward, as if to get a little extra workout on his core.

All of this energy pulsated in such a way that he was much older than his sister was when he began to sit still for a whole page of a picture book.  (I know!  Knock me over with a feather!  Biologically rooted differences!  Go figure!)  We can’t help but love every iota of his being, regardless of where his being takes him.  But we were also thrilled to see that the energy in his body is not making it impossible for him to become still and mine wonder from a book.

Some time ago, he began being able to sit through several pages of a picture book at a time.  Then he managed a whole short book.  And now, on the eve of his second birthday, he is picking up books and sitting down and “reading” them on his own, often inviting “Sissy” to sit next to him.  They sat on our bed, above, for a good fifteen minutes, side by side this way.