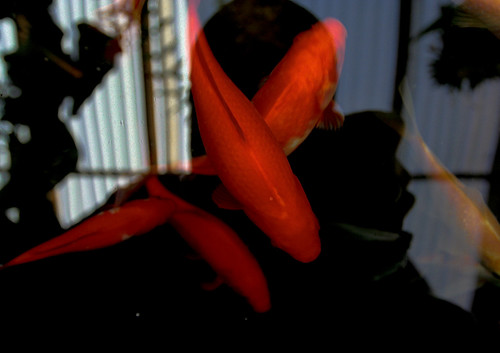 Self portrait with carp.

In times of distess, or even just aimlessness, I head to the local nursery. Lately, in the gradual, curious return of everyday life in the post-Prop 8 limbo, I find myself there a lot. Â

The other day I brought along the boy child, after having dropped off the girl child at her preschool nearby (which she insists on calling “school”: she does not even register a flicker of response to the word “preschool,” neither does she brook the actual name of the school, a dear word indicative of youthfulness). Â

My son’s and my first stop at the nursery is the obligatory one at the fish tank, where the aquatic plants are displayed. Â I yet again fantasize about building and stocking a pond in the back yard. Â Yet again I abort the thought after it splits (as it always does) and ends up in two ghoulishly miserable scenarios, one bad, the other worst. Bad: raccoons paw all the poor critters out and feast on them, and we wake in the morning to the sight of dismembered fish parts strewn about the lawn. Â Worst: you don’t even want to think of it, but it involves a kid, most likely the youngest but not necessarily and yes, such thoughts pry their way into the head, if not daily, then altogether too often.

No fish pond for our back yard, at least not yet. Â But the carp in the tank at the nursery are mesmerizing.

After the carp, the lil’ peanut and I commence to zig-zagging through the shade and then sun perennials; we cruise through the flotilla of camelias; Â hide and seek among the ferns and the California natives. Â Over past the fruit trees, I see my chum Ben, clearing space for what will become dozens upon dozens of nubby roses. Â He’s worked at this nursery as long as I’ve frequented it, which has been since I returned to the Bay Area after my sojourn away to the Great Upper Midwest for grad school, over a dozen years ago now. Â During the years I was working as a freelance gardener, I got to see him more often. Â With various desk-bound day jobs, it’s been less. Â But whenever I’m blue or adrift, a visit to his nursery does for me what I imagine a trip to a house of worship does for the devout.

Ben and I usually talk politics. Â So much to bemoan in recent years. Â And then, during the campaign, so much to be hopeful of. Â Ben is in his sixties, I’d guess, though early. Â Maybe his late fifties. Â Tall and lanky. Â Salt and pepper beard, close cropped; worn creases in his face. Â He usually wears a floppy gardener’s hat, so I can’t vouch for the locale of his hairline. Â His eyes are big and dark, his complexion a gorgeous deep chocolate, nearly blue-black. Â He’s a chef, and a wit, and a big-feeling person. Â We’ve always recognized in one another a kindred spirit. Â I’m actually not sure I’ve ever asked him a horticultural question in all our conversations. Â Though he does know I regard the nursery as my church, each plant one or another passage of scripture, or a koan, each blossom the detail on stained glass, or a Â thangka.

When we see one another, we immediately hug and kiss, per usual. Â I say, “Congratulations to us all!” Â Feeling, as I say it, the halting tug on the interior, the Prop 8 fly in our Obama ointment. Â Residual scars are on us both, to differing degrees, from the post-election flare-ups of white racism, illuminating the vastness of the reparations yet unmade. Â The gulf our history on this continent has carved between us. Â My people’s complicity. Â The life I lead as a result of it.

I might have followed with a rant about the aggressive, not even apologetic incursion of one narrow, harsh brand of church into the state, about how I will never understand how ordinary people can take what they believe (who cares what they believe? God love ’em!), and then actually think that it not only makes sense to, but that it’s their duty to impose that belief on every other citizen of the state, even those of us whose spiritual practices teach us the exact opposite. Â  Oh, don’t get me started. Â Actually, I’m sure Ben and I could have egged one another on to great heights. Â But his kind words were enough.

I didn’t have rant in me, anyway. Â Some days, the rant runs dry, and what’s left is hollow amazement, and glimpses of the perspective that big hard battles like this manyÂ decades-old LGBT civil equality one are riddled with very, very hard setbacks. Â That’s what makes the justice so sweet at the end of the line. Â More to the point, Ben had been to the Million Man March, (which says a lot more about a West Coast resident than it does an East Coast one, I hasten to note: that’s a long, long trip for us out here). Â And I know how many home-made Obama t-shirts Ben had been selling down at Everett & Jones, a storied local BBQ joint. Â The brilliance of Obama’s victory eclipsed the pain of the Prop 8 loss. Â Since it’s not like the parade is not still jaw-droppingly, knee-bucklingly, truly mind-bendingly majestic, even if some of us at it are getting seriously rained on.

Ben and I talk about all sorts of things, while I perch my boy on my hip. Â What it’s going to mean, with this family coming into the White House. Â What the young people are going to begin to learn. Â Ben laments the ignorance, the lack of history. Â We both share embers of hope about so much. Â I convey my image, always accompanied by feverish gesticulation, of the nation and the world in a nose dive (hand swoops down in a steep jab downward), and with the election of this president, my thought that we might all actually be capable of pulling hard hard on the airplane’s yoke (two fists, shaking, pulling back against imaginary tension), and it’s going to take every one of us, all of us pulling hard on the waist of the person in front of us, but we actually just might make it (right hand indicating a near-miss scoop of the ground, indicated by left hand, then up up up goes the right hand, airborne again and away from danger). Â My son swoops and dips along with the gesticulation.

I say, “The first, deepest, most visceral feeling I had when Obama won was relief. Â Deep relief for my kids’ future. Â Like, they might actually have one.”

“Tell it, sister,” says Ben. Â We all of us who’ve had our eyes open were scared as all get-out. Â I still am. Â I spend a lot more time in the succulents and the California natives section of the nursery now than I ever did before, planning for the drought-ridden, water-scarce, globally-warmed future I know my children will occupy. Â That’s presuming we aren’t already undone by religious fundamentalism first, or the spiraling pathology of corporate/imperial greed.

What stuck with me for a long time after Ben and I talked was the image of him, the night of the election, at Everett & Jones. Â He tells me he’d made a big sign with a paraphrase of Dr. Martin Luther King, Jr.’s line from his “I Have a Dream” speech on the backside of it: “We are all equal.” Â On the front he had drawn an American flag.

It might not have beenÂ Gil Scott-Heron’s vision come true, that night. Â When we looked at our respective televisions election night, neither Ben nor I saw the revolution. Â “It” was not televised because “it” was not The Revolution. Â It was not “Roy Wilkins strolling through Watts in a red, black, and green liberation jumpsuit that he had been saving for just the proper occasion.” Â What we did see, live, was a black man in a suit and tie, joined by his Ivy League professional wife and their two beautiful daughters, striding out onto a stage before tens of thousands in Grant Park, Chicago, and taking with them a whole nation to a place we haven’t been yet, but have been needing to go for — how long? Â  Too long. Â Do we go back 143 years? To the abolition of U.S. slavery? Â Or 401 years? Â Back to the arrival of the first African slaves in the Virginia colony?

We have no idea what this is going to do to the way Americans experience racial division. Â Though right along with global warming, I worry that (1) we’re already hoping for too much even now, and the disappointment will ricochet all over the place, worse than if he were just any old white liar from whom we expected little, and (2) he won’t live out his first term. Â Can’t even really go there. Â It’s unthinkable, like the second bad news fish pond scenario. Â

At the same time, my son chants “Go, ‘Bama, Go, ‘Bama, Brack Obama!!” every time he sees an image of his new president. Without fail. This face will be the first face of international leadership my children will know. Â That, and Ben with tears in his eyes, waving an American flag at Everett and Jones. Some days, that’s enough for me.Â

[next in this marraige equality series: Pas de deux]

2 thoughts on “A chat with Ben”