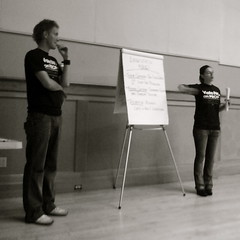 Gone! Along with all sense of proportion to the world!  Which will return in three — count ’em: 3! — days.  Come hell or high water, and today, at least in my home state, it looks like both are heading our way.

This weekend, behold, at right, a crummy cameraphone picture of the two crack Election Day trainers doing ’round the clock trainings for No on 8 volunteers at the First Congregational Church in Berkeley, out of which phone banking has been done for the past eleven plus weeks.  Yep, ’cause if you look at the locations of the phone banks for No on 8, you’ll notice a preponderance of faith communities.  All of organized religion is by no means united behind the anti-marriage equality message, though the volume of the message from the passionately anti-gay marriage religious contingent might make one think that.  Here’s the long, long list of faith-based organizations actively supporting the No on 8 effort.

I’m horning in on my customary weekend text-free quietude to share two things: One is an update on the fundraising, and renewed urgent need to raise funds to respond to some major Yes on 8 deception.

Second is a synopsis of the relevant stuff I learned at the Election Day training.

The first is so time-dated that I’m going to post this once I get it out, and then follow it (lil’ guy’s nap permitting) with the Election Day message.  Those on the bleeding edge of all this malarkey out here would know that the Yes on 8 people, before filling a San Diego stadium to rile themselves up (“blitzkrieg moment” was the term one leader used), sent out over a million copies of a mailer that implied that Obama was in favor of Proposition 8, because he is — as yet — not an unmitigated supporter of gay marriage.  Pam Spaulding has a thing on it at Pam’s House Blend, and anyone who’s on the No on 8 or EQCA or NCLR mailing lists will have gotten their email from Geoff Kors or Kate Kendall this morning.

I couldn’t agree more with Pam’s first two paragraphs: this was a trump card just waiting to be played — they are not misrepresenting Obama on gay marriage, after all, just his position on passing discriminatory laws prohibiting it — and they wisely waited ’til the eleventh hour to play it.  It seems just too darn subtle to too darn many people, that you can be against something, even grossed out by it, and YOU DON’T HAVE TO RUN AND MAKE IT ILLEGAL FOR OTHER PEOPLE.  Particularly if you have to mar the constitution to do it.  (Ooops!  I’ve gone and gotten all frothed up again.)  I’ll save more of my teeth gnashing on this hole in our strategy a mile wide (and hole, thy name is Obama/Biden/every other lilly-livered Democrat’s waffling on the matter) ’til after the election, when I’ll have plenty of time to gnash (and brush, and floss) my teeth.

Meanwhile, No on 8 has made a TV ad to clarify Obama’s (frustratingly mitigaged, if still consistent) position, which is IN OPPOSITION TO PROPOSITION 8 (you hereby have my encouragement to help this go viral):

At the Election Day training I attended earlier today, one of the speakers said they’ll need to raise about $10,000 to fund the additional material to specifically counter this (? though that sounds modest).  The good news is that 24,000 people stepped up for the $3 mil in 3 days campaign, and you LD Love Train riders have yourselves to partially thank for this.  All I needed were a few suggestions to up the goal again, and up it went to $18,000.

Which is a good thing. Because again, we renew the call to donate what you can, again if you have before, and ask others, again (if you have before), or push past your comfort level to ask new people, for the first time.  At the Election Day training, one of the speakers told us about this, and asked if we could donate (again).  She said she’d donated 15 times.  I totally believe that.  I think my household might be approaching that.  I did, again, at the training, and we managed to raise another $6,000 that very day, I just heard.  From tapped out, fired up, volunteers who braved Cal football game day parking nightmares and our first seasonal downpour to get to the church.

I’m just saying.  This is dedication.  Or, as I said to my nephew, who was among the rain-drenched folks being trained for Election Day volunteering: this is the pulsating heart of democracy right here, beating.  Thump thump thump.

What would have been the Weekend bonus shot, had hellfire and brimstone not been raining down upon us this weekend: 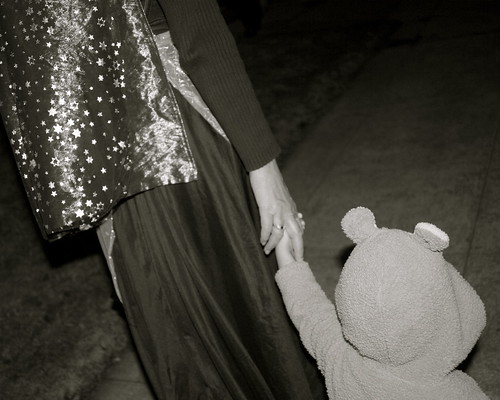 The lil’ peanut as a lil’ monkey, guided by his downstairs Auntie.

[next in this marraige equality series: Tonight’s chat with Pops]

5 thoughts on “Weekend bonus sh– aw who am I kidding, it’s another No on 8 update”