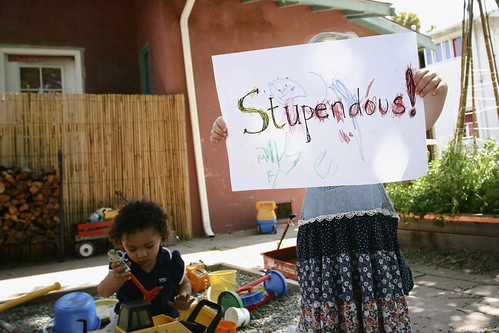 The observant and widely blog-read will recognize none other than Sassa, of Accident of Hope fame, availing herself of the gravel pit. Today’s landmark court decision in favor of same-sex marriage was handed down smack dab in the middle of an inter-state lesbian parent blogger schmooze-fest. Auspicious, since Chicory got hitched here with her gal Klove, back that love-struck February, four years ago.

Now here, listen to what the highest court of the nation’s most populous state has to say:

. . . we conclude that, under this states Constitution, the constitutionally based right to marry properly must be understood to encompass the core set of basic substantive legal rights and attributes traditionally associated with marriage that are so integral to an individuals liberty and personal autonomy that they may not be eliminated or abrogated by the Legislature or by the electorate through the statutory initiative process. These core substantive rights include, most fundamentally, the opportunity of an individual to establish with the person with whom the individual has chosen to share his or her life an officially recognized and protected family possessing mutual rights and responsibilities and entitled to the same respect and dignity accorded a union traditionally designated as marriage. As past cases establish, the substantive right of two adults who share a loving relationship to join together to establish an officially recognized family of their own and, if the couple chooses, to raise children within that family constitutes a vitally important attribute of the fundamental interest in liberty and personal autonomy that the California Constitution secures to all persons for the benefit of both the individual and society.

Furthermore, in contrast to earlier times, our state now recognizes that an individuals capacity to establish a loving and long-term committed relationship with another person and responsibly to care for and raise children does not depend upon the individuals sexual orientation, and, more generally, that an individuals sexual orientation like a persons race or gender does not constitute a legitimate basis upon which to deny or withhold legal rights. We therefore conclude that in view of the substance and significance of the fundamental constitutional right to form a family relationship, the California Constitution properly must be interpreted to guarantee this basic civil right to all Californians, whether gay or heterosexual, and to same-sex couples as well as to opposite-sex couples.