Today was Reader Appreciation Day, an event spear-headed by Robin Reagler, our gal over at The Other Mother. Robin has been a lesbian parent blogospheric cheerleader par excellence lately. This is her second group fun-fest in a few months, the earlier one being the Freedom to Marry week carnival of posts, celebrating something old, new, borrowed, and blue (here are the players for that one). Today she posted a round-up of folks in our neck of the blogosphere who write blogs and hugely appreciate that someone beyond their significant others and/or cats read ’em. 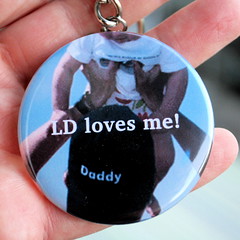 Count me among that group — the late-to-the party subset of it, that is, posting her thanks in the last minutes of the eleventh hour. Out here on the West Coast, at least, I’m just under the wire. I had plenty of notice, of course; just not enough time in the proverbial day.

Which topic (not enough time to write!) is a lot of what I wind up writing about lately, when I can write, and don’t punt and post a picture instead. So for your tolerating the intermittent, motley trickle here, gentle readers, I thank you. It’s feast and famine at LD, sacred and profane, but often — no, nearly always — I’m offering up less than I’d rather have, and less frequently.

Many weeks I have no time, some weeks I have little spirit, others I have enough of both but no bright ideas. For being there and actually reading, regularly, despite how choppy my output is, I thank you. After our second kid came, the time has been far more stretched, the output yet more choppy. And still you’re there.

For being there for each other — sharing your thoughts and your good will, I thank you. If I had more time (!) I’d single you out, like Miss MaryAnn did in Romper Room (though did she ever say my name? no!). Instead, I am going to hog up all the column inches it will take to at least name everyone who’s registered — either to comment regularly, or occasionally, or just once, or even to think of one day commenting — below. In order of the sequence in which you’ve registered, here you are, all 300 of you. I’ve done a kind of home-spun “tag cloud,” with the variable font size, to reflect how chit-chatty and worthy of special commenter love some of you are (please accept my apologies if I have not given some of you your due; this is not scientific, and dang that font is teeny tiny and I coulda simply just missed you):

Yowza! Now, everyone, introduce yourselves to your neighbor! Thank you, all of you, for coming to the party and helping make it what it is. You may be the tip of the reader iceberg (five to ten percent of it, if my calculations are on target), but you’re the visible, garrulous tip, and I love ya for it! (They also serve who sit and read quietly, so fret not you shy/silent lurksters, I love you too!)

I’ve said it before, and I’m so glad to say it again: I totally didn’t expect more than a dozen people to read this thing in the first place. But when a dozen became two dozen, and more, and then some of you started chatting back to me, and then each other, well then. This project actually became, officially, a whole lot greater than the sum of its parts. For which, again, I am hugely thankful.

I thank you for that and so much more. I thank you for your good cheer: I’ve never once felt the need to nix a comment left by someone who was out to spread ill will or malice, something I rather worried about at the outset. I’ve only deleted out-and-out spam (of which there’s plenty, lord knows). So for extending a bit of my faith in human nature, by virtue of your grace and civility here, I thank you.

I thank you for your generosity. To take one recent but dramatic instance, Body Mascot/Mascotte del Corpo voluntarily translated my mongrel Spanglish “Una pequeÃ±a nota” page into actual Spanish. All this time I had been wincing over it, yet I had to write and post something, since, duh, “lesbiandad” means “lesbianism” in Spanish. How was I going to go and confuse so many innocent Googlers? Not that there isn’t any lesbianism here. But it’s not like it’s lesbianism in general. Anyway. She just up and sent me a whole, tidy, graceful, page. Just like that. Thank you, Body Mascott.

And take another, perhaps less dramatic, but utterly constant instance. Registered reader # 3 in that list up there, annz, proofreads EVERY DAMN WORD I post here, people. And then either calls me, or pops me an email, with encouraging words and then diplomatically noted suggestions about what went awry. Without her dilligence and dedication, this whole blog would be more tangled up than the underside of my hair was for most of my tomboy youth. Thank you, annz.

[I might also note, sotto voce, that the beloved, who hasn’t yet registered and may just never, does the same thing, training her unforgiving lugubrious-o-meter on my frequent flights of over-emoting. Leave it to a theater artist to thin out the excess drama. Without her dilligence and dedication, this whole blog would be more treacly than the concluding pages of a Harlequin Romance. Thank you, beloved.]

And I’ve been getting fantastic responses to what’s sure to become my annual Reader Survey. I can begin to make out a composite sketch of you-alls, or at least the five-to-ten percent of you who took the time to fill out the survey. Had I been able to scrounge even more time, I’d-a provided a summary of survey findings as part of the offerings today. Unfortunately, that will have to come a bit later, since it deserves much massaging. Here’s a rough demographic portrait, though: you (respondents) are mostly female, mostly lesbians, mostly white, mostly educated, mostly in your thirties, mostly in English-speaking countries (surprise, surprise! you look like me! behold, the much-ballyhoo’d blogular echo chamber!).

More to the point here is that a bunch of you have written very kind things to me. Either in this survey — which helped give a venue for the shy/silent lurkster contingent — or online in a comment, or offline in an email, so many of you have helped me to feel like it has been worth it to take a writerly risk. At the core, I hope that the mirror 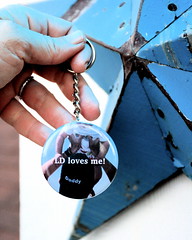 I hold up to facets of my family’s life in this blog reflects facets of your own; I hope that we all meet one another’s gaze in that mirror there, and recognize one another as kin. It feels risky at times, and each time I feel I might have gone out on a limb, someone or another writes and says: Thank you for just describing the limb I’m on. For this priceless encouragement and more, for the confirmation that we’re none of us alone, I thank you back. It is a pure oxygen which I hope flows freely back and forth amongst all of us.

And now! Before I miss the deadline entirely, I want to express my gratitude with my third Nonsense funfest schwag give-away (Robin encouraged give-aways, and it’s high time I do another one; this was the first, this was the second). The prize here is none other than the first (maybe the only? depends on popular demand) LesbianDad Keychain! Pictured above and at left! Yep! Cheap as can be; it’ll probably break in a month! And no one will know what it means, except you! Yay! On some post some time back, a little chit-chat bubbled up and a quip was made about schwag, and a keychain, and I noodled around a bit online and the next thing I knew, this thing came in the mail!

How to disperse it, in a way befitting Reader Appreciation Day? Here:

YOU COME UP WITH A GREAT TITLE FOR A POST,
AND I’LL WRITE THE POST TO ACCOMPANY IT.

Let’s run this for a week, say, by midnight next Wednesday night (April 23). Best title gets the post, and the keychain. Think of it as a kind of souped-up “U-caption it.” Challenge me. Entertain yourself. Do both.

The jury will consist of the two family members here (other than me) who can speak. They’ll decide which title I should write the post for, though I’ll bet they might be influenced by your own response to one another, should there be any. Judging criteria will remain shrouded in mystery. Should they deadlock, the tie will be broken by the lil’ peanut, who will tilt forward, let loose a baby-moose kind of cry, and stagger headlong into the list, slapping his meaty little hand down on the lucky winner. Though in my book, I’m the big winner here. For which, again and finally, I thank you, gentle readers.

9 thoughts on “Thank you, gentle readers”