[Ed note: the following dada narrative was dictated by the lil’ monkey to the beloved, who faithfully recorded it verbatim. Wee book making, with dictated narration to accompany illustrations, has become a favorite pastime. So far, the booklets — note pad-sized pages, stapled together —

have been in dialog with some story we’ve read that’s been filling her head. Her take on Polly the Party Fun Fairy came first, and gets featured later, when I’m able to give the whole fairy topic its due.

Today, we feature her take on the world’s first LGBT-family-friendly kid’s show, Dottie’s Magic Pockets! Peep clips of the show on their YouTube Dottie Extravaganza here! (If you look carefully on their YouTube page, you’ll see Up Popped a Fox‘ adorable singing kid!)

We ran out of Julie Andrews musicals to show the kid, and finally succombed to the multiple raves and plugs on Mombian (and when has Sister Dana steered us wrong?). We ordered us up some LGBT family fun, and regret not a penny of it! Readers familiar with Dottie’s Magic Pockets will find a sketchy resemblance to their beloved show in the narrative below. The rest of you, hop online and get yours today, and find out what the show is really about.]

Dottie and the Sun

Once upon a time, there was a woman named Dottie. Dottie lived with her son named Ollie. Then she had an idea. She would get her gift out of the bag right in the second that her son was at school.

When her son was back he would see all sorts of glitter all over the room. Then he would say, “What a mess!” 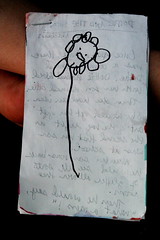 [Ed note: Aha! So that’s what it’s called! Now I know to look up from the keyboard when I hear, “Baba, I just ‘resourced’ our walls! Don’t they look pretty?”]

James, in the corner sipping his tea, looking through the window, having more of his breakfast with it.

Her son named Ollie and Wally (the two hands with gloves on it) the red guitar with peacock feathers — they are the design on the guitar. Ollie came home from school.

The glitter was all over the floor. Soon, Ollie said, “What?” And he collected it all up.

Then, Dottie made a lot of candy and put it in a basket, then put it all over the floor. And Ollie is eating it all because he ate all of his breakfast.

[Ed note: This is a notable departure from the show, which does not feature candy of any sort, at least in the first two episodes. I do see traces of Polly the Party Fun Fairy, though, which ends on a cravenly kid-pandering note: mass distribution of candies to a bunch of girls on a camping expedition. Really. The kid lit equivalent of the slow-mo hotties running on the beach scenes in Baywatch. If I wrote a kid’s book, it would be tofu treats or nada!].

The two mamas stared at their son. And the bow in Dottie’s hair.

[Ed note: Viewers will agree, it is rather voluminous.]

“What should we do?” said the two moms all together.

“Well, our son is eating the candy — now what? Should we do nothing?! Now, what is this mess?”

The son was eating almost all the candy. 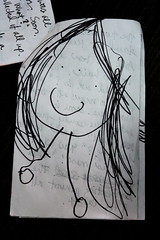 Looking through the window is very impossible.

[Ed. note: truer words were never spoken. There is no view through the window, only various illustrations. An astute observer, the monkey.]

James, with a funny wig on (someone didn’t know he was a flower so poked all the petals off his face).

Up and down and round and round

One thought on “A Dottie tribute”