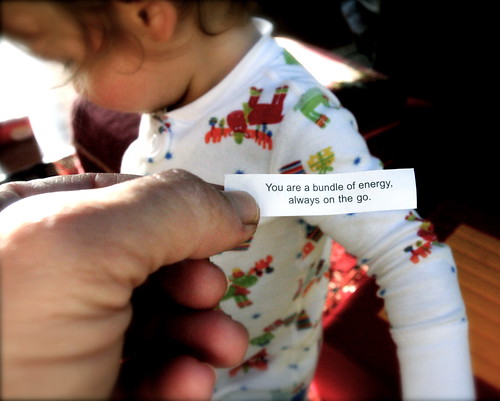 “You are a bundle of energy, always on the go.”

This fortune should have gone to the lil’ peanut, rather than the Baba, who is an Object At Rest Trying Valiantly, Against All Odds, To Stay At Rest. If I had a personalized license plate, it would read: I [heart] NRTIA. (Which inspires a digression: in California, for some time now, licence plates have included cutsie symbols like hearts and hands. And of course upon first seeing one, my immediate thought was, How does a serious California Highway Patrol officer phone in one of these? When they get to the “heart” part? And still sound butch enough?)

The lil’ peanut was a bundle of energy last night, always on the go, all the way up until around about 3:30am, when we finally left Children’s Hospital. Kindly medical professionals there tanked him up on oxygen, albuterol, and steroids yet again (we’ve been there once before; if you don’t have the time or inclination to peruse that short post, the key take-home image is this one, depicting what I fear to be the inevitable result of his youthful intake of steroids).

He left Children’s Hospital smiling and breathing easy*, which was good, since he arrived panting like a dog on a hotter-than-July day. That’s how we were breathing upon arrival, too, but it was from worry, not swollen air passages. Doesn’t help that we spent near on nine months in and out of that building, during my nephew’s fierce, losing battle with brain cancer. That building may be home to as many triumphs as tragedies, but in our family, the latter is what defines the place. It also doesn’t help that the third anniversary of the end of that battle is this coming Monday. My nephew was a bundle of energy, too. Always on the go. In retrospect, I think it’s because some wordless part of him knew he had a lot of living to pack into a short time.

Last night, what we needed (aside from not being in that building) was for the pulse oximeter thingy — that doolie-bop that they attach to a digit to read the oxygen level of the blood — to have a spring at the end of its cord. That way, he could have bungee-jumped up and down off the side of the little bed in our curtained-off holding pen. Which would have been infinitely less stressful than trying to hold his corkscrewing body for four wide-awake, fluorescently-lit, middle-of-the-nightime hours, waving a steam-spouting tube in the vicinity of his rotating face.

At the raggedy end of our stint he was done with the medicinal misting, and we began to try to let him walk around a bit. His main goal was to play peek-a-boo with the three year-old girl on the other side of the curtain. Her mother endeared herself to me by erupting with “Â¡Ay, que guapo!” or “Â¡Ay, que lindo!” every time he popped his head around. She asked her daughter whether she’d like them to take him home with them, and her daughter, a living doll herself, managed a little smile, and said “SÃ­.”

All was well with his peregrinations until he managed to break away and bolt to the end of the pulse ox cord, which of course promptly yanked him down. He let out a wail of frustration, let me right his little body, and then went back to the business of roving around, true to his fortune, and to his inheritance from his oldest cousin.

* Diagnosis: bronchialitis or mebbe incipient asthma; time will tell, but he’s on the mend. The stuff of many a babyhood.