As the well-informed among you know, Banned Books Week began last Saturday, and continues on through this week. And Tango Makes Three, the true-to-life tale of two Central Park Zoo penguin males who hatched and still care for a penguin chick, topped the most challenged books list of 2006. Other LGBT-themed books among the Most Frequently Challenged books of 1990-2000 include Daddyâ€™s Roommate, Heather Has Two Mommies, and Annie on My Mind. (Keeping those titles company are others like Isabel Allendeâ€™s The House of Spirits, Rudolfo Anayaâ€™s Bless Me, Ultima, Margaret Atwoodâ€™s The Handmaidâ€™s Tale, John Steinbeckâ€™s Of Mice and Men, Richard Wrightâ€™s Native Son, and Kurt Vonnegutâ€™s Slaughterhouse Five.)

The American Library Association notes that â€œparents challenge materials more often than any other group,â€ and that â€œchallenges do not simply involve a person expressing a point of view; rather, they are an attempt to remove material from the curriculum or library, thereby restricting the access of others.â€

While such attempts may make some of us quite jittery about the state of democracy in our nation today, we must also concede that the freedom to gripe and kvetch, even to try to back seat drive other peopleâ€™s brains, is as American as apple pie, baked in an industrial-type facility by underpaid workers with marginal health care and negligible retirement security.

It is in this hallowed tradition that I humbly offer up my own list of titles which I believe have been overlooked in the stampede to banish sundry literary classics and heartwarming tales of family diversity from the public imagination.

The Cat in the Hat, by some chap so afraid to be known to the public that he masqueraded under a pseudonym, Dr. Seuss. As if he was a real doctor. Basically this is about a totally out of control cat and his totally out of control â€œthingâ€ friends. Gives kids the mistaken idea they can run rampant all over the house simply because their (oops!) their mother abandoned them for the day. And then itâ€™s all abracadabra or what have you, and everythingâ€™s cleaned up. I, for one, resent that. If all the children across America took this nasty feline as their role model, bedlam would rule.

Curious George, by H.A. Rey. Basically this is about a totally out of control monkey, who gets himself into all manner of trouble by cravenly disregarding authority of every kind. “He was a good little monkey, but he was very curious.” As if that excuses anything. Eating too much spaghetti, painting things, soaping up rugs, riding on cows, sending a flotilla of newspaper boats down a river. If all the children across America took this little primate as their role model, havoc would rule.

Lassie, Come Home, by Eric Night. Basically this is about a totally out of control dog who runs away from the proper home of the rich person who bought him, fair and square. What kind of example is this for the children? That if youâ€™re wrenched from your home 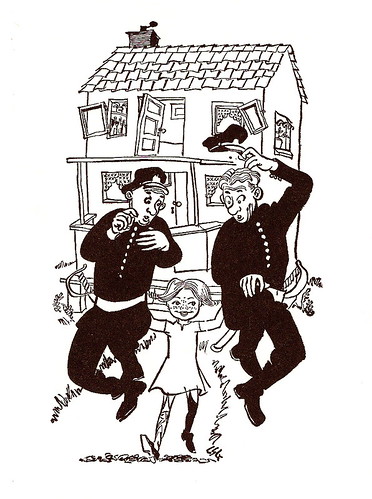 and sold off to someone else, you have some right to tramp your way across the countryside until youâ€™re back â€œhomeâ€? Furthermore, in the film version, Roddy McDowall played the impoverished young boy to whom the dog Lassie returned. Everyone knows he turned out to be a poofter, so what kind of example is that for the little ones, should the book inspire them to see the film? That it’s perfectly all right to be an impoverished little British country boy who is going to grow up to be a fey actor? Not in my America.

Pippi Longstocking, by Astrid Lingren. This red-headed orphan girl romps about and does as she pleases, accompanied by a little monkey named Mr. Nilssen and not a shred of decency. She does Curious George one better, and not only ignores, but is utterly contemptuous of authority. You doubt me? Consider exhibit A, the brazenly titled chapter, “Pippi Plays Tag With Some Policemen” (illustration above right). To make matters worse, Miss Longstocking possesses alarming upper body strength. If children adopted her attitude, and worked their pecs and delts and biceps and triceps to boot, anarchy would surely reign supreme.

Rebecca of Sunnybrook Farm, by Kate Douglas Wiggin. What do we do with this one? This urchin was sent to her â€œspinster auntsâ€ for a proper lady-like education, and it’s nearly lost on her due to her â€œwild and zestfulâ€ nature. One or both of these â€œspinster auntsâ€ could very well be lesbians (who are known to masquerade as â€œspinster auntsâ€), and for this reason alone (not to mention the unbridled spirit of the protagonist), the book should be kept out of all young girlsâ€™ hands.

The Runaway Bunny, by Margaret Wise Brown and Clement Hurd. I’m not sure I need to go any further than to inimate that Margaret Wise Brown was once a habituÃ© of the Isle of Lesbos, if you catch my drift (if you must know, it was a years-long affair with a woman who went by the name “Michael Strange,” the former wife of actor John Barrymore). But if you need more, I submit to you the simple plot line, in which a bunny is constantly trying to run away from his mother. What did she do to him? Nothing! All she wants to do is track him down to the ends of the earth, shape-shifting into whatever she possibly can — a fisherman, a rock, the wind — to nab the ungrateful wretch. Do you want to live in the kind of mother-hating world this book depicts? I didn’t think so.

The Tale of Peter Rabbit, by Beatrix Potter. And while we’re on the subject of feckless bunnies. This one thinks itâ€™s perfectly fine to trample someoneâ€™s carefully tended vegetable garden, and he tops that with the audacity to resent the prospect of being made into a fine stew, or a pie, or some such (a fate that most appropriately befell his dad, who trampled before him). Where is the sense of morality in this tale? How will the children learn that their naughty behavior has its consequences? Such as being made into a pie?

The Story of Ferdinand, by Munro Leaf and Robert Lawson. This light-in-the-loafers bull makes being a conscientious objector look attractive. Enough said.

Dada Friday: Reich at a crosswalk

7 thoughts on “A few more for the challenged books list”