Initially I intended to efficiently attend to some administrative blog housekeeping, and note two tweaks to the features and content delivery here at LD. This, after a pause to issue the caveat that, if only I knew more about WordPress wrangling, and if only I had the discretionary time to gain said know-how, I’d have long since instituted a herd of spiffy improvements. Would that I could be noting them, in their plentitude. But I can’t.

(Hell’s bells, I can’t even figure out how not to have the links along the right margin be anything other than alphabetical! Per the WordPress default! So I wiggle around and craftily concoct category titles that begin with the letters of the alphabet that would order them in some kind of sensible sequence!)

But enough of that tale of woe! Let’s us return to the pressing matter of housekeeping.

The first item to note is that I made a sub-page and stashed a bunch of posts on it that I consider representative of the best of my LesbianDad output. Some of these used to be listed under a link category “Background Reading at LD,” which is what they still are. Only now they’re not hogging up front page real estate.

Using either device, I wanted to enable readers new to the blog to be able to get to the wheat without having to winnow through months and months of archival chaff. Thereby inspiring the intrepid to hang around for at least a few more months in dogged expectation of another munch of wheat again. I plucked what I plucked based on a combination of oral and written feedback I’ve recieved from people, plus my own judgement.

Second, to the dustbunnies. With a mixture of regret and resentment, I’ve cut back the public access to the pictures I’ve stashed over at Flickr (the web-based photo storing and sharing site that I’ve used as a “bucket” to store my image files). Relatively few of you hop into the rabbit hole of the Flickr photo link, but those that have will have discovered the fun of wandering to and fro amidst my posted and un-posted images (hoop dee do), or meandering about in the vast photographic panorama that is Flickr. Which can be an entertaining time-suck, particularly for those of us who are connaisseurs of the photographic image.

However, it sucks other stuff, too, as I recently discovered. 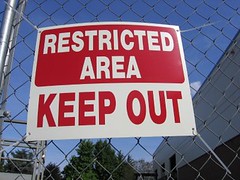 Long story medium-length, with Flickr, a registered user can mark a photo as a “favorite,” thereby accumulating a personal photo album. I noticed that a photo I posted of one of the kiddles was “favorited” by two users whose photo albums contained images I just plain don’t want side-by-side with images of my bairn. ‘Nuff said. Whether or not the juxtaposition is meaningful or random.

Alas, alack. Much is afoot here (exceeding the bounds of a single housekeeping post, to be sure). Afoot are the ethical questions surrounding writing about one’s family (as many do, take Anne Lamott for instance); likewise the ethical questions surrounding using one’s kids as photographic subject (Sally Mann springs to mind). Myself, I wonder and worry about all these questions, and about whether doing either of these things online somehow exacerbates some of their inherent risks, given how easy it is for people to digitally dig for personal info. (Here’s a recent CNET News bit, for instance, staking out the common issues family blogging raises.) The dilemma boils down to a tug-of-war between the safety of privacy versus the potential value of publicity. Keeping our lives and images private keeps me (and my kids) at arm’s reach from people I don’t know and am likely to never want to meet online or in person. Yet making facets of our lives and images of them public enables me (and my kids) to be of some potential value beyond our own immediate circle of aquaintance. To people whom I’d be only too pleased to meet.

Ultimately I’d rather honor and support kindred spirits than humor my fears about evil ones. And up until this point I’ve felt the benefit outweighed the costs. Far more worries are to be had in the physical world surrounding my kids than the virtual one to which I’ve introduced bits of them. At the same time, I’ve also known that there’d come a time when I would draw tighter bounding lines around what I would share, either in words or images, about my kids. At some point of course it should be their call; many would say the call should be made on their behalf even now, and that call should be to shut down all images and most personal details.

There’s plenty of merit in that position, and I gave it a great deal of thought before paddling out into the choppy internet seas in this little craft. At least on this leg of the journey, I’ve decided to imagine that I’m speaking to friends and future friends, and have swept the foes to the edges of my consciousness. I hope that won’t have been too Pollyanaish a practice. Regardless, I have every expectation that at some point I’ll head this craft back into shore and put it up on blocks for good, either because it’s right for our kids, or it’s right for me.

I’m not there yet, mostly because I immensely value the sense of community that is teeming all around — and I’ve got to believe, far more influential than — the occasional leering oddbodkin. I genuinely think that we are feeding each other the very staff of life when we share our stories with one another. I felt far too alone as a lesbian parent, particularly one who didn’t give birth. I need to carve out a place for my parenthood, and I need other people to understand our family. I need other families like ours to feel less alone, I need to hear from them how to do what we’re doing better. More wisely, with more love.

Meantime, I’ll make it just a weensy bit harder for random folks to run across images of my kids. Like, they don’t get to be lazy and float around Flickr; they have to actually be struck with the inspiration to Google “lesbian parent blog,” and then when they find us they’ll have to read heartwarming stories and the like, of ordinary (lesbian family) lives. For whatever that’s worth.

From the vault: a Copenhagen pictorial (1)