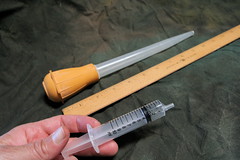 After stumbling across Steven Colbert’s reference, a week ago Tuesday, to covens of lesbian feminists inseminating themselves with turkey basters, I felt it necessary, as a self-appointed agent of public enlightenment on matters pertaining to lesbian parenthood, to clarify the real relationship between lesbian gals trying to conceive (or TTC, as we call it) and this most storied of kitchen utensils.

You see I, too, dear reader, was once uninitiated. And not merely to the mysterious ways of alternative insemination (or AI, as we call it). I needn’t belabor the details, but let us just say, it was News To Me that the turkey baster isn’t at all an appropriate means to deliver the wherewithal of one’s future children into one’s sweetie’s womb. In fact, the notion is, to put it mildly, balderdash. One could also say it is bunk, drivel, piffle, poppycock, rubbish, and twaddle (all radiant Wiktionary synonyms for balderdash). Or one could also cut to the chase, and aknowledge that the turkey baster reference is yet one more tawdry, fatigued example of masculinist hyperbole. It’s not so much the dimensions of the object that are inappropriate. It’s the volume of liquid it is designed to transport.

Allow me to share a wee anecdote, by way of illustration. With both our donor chums, the whole insemination process was refreshingly low-tech, employing objects that any self-respecting Let’s Make A Deal contestant might have stashed in her purse. The very first insemination we did was a good six years after we had completed our “Maybe Baby” class at the local lesbian-run midwifery, but a full two years before our daughter was born. On the big night, I drove to our chum’s place at an aforementioned hour, and flashed the car headlights. Not because I had to; it was just more fun that way. He had cooked a fine meal with the contents of a jar of marinated artichokes, then cleaned it out, boiled it, and dried it, per our specifications. Filling it was per his own specifications, and that is a story for him to tell, should he like to (he has mused about doing an Esquire piece from time to time).

After I blinked my car’s headlights, he blinked his porch light on and off, (not because he had to; it was just more fun that way), then darted out to the car with the jar nestled inside his gym sock, also per our instructions. The sperm needed to remain warm — but not too warm! — on their ride home with me, en route to their date with destiny, a.k.a. my beloved’s waiting, egg-filled fallopian tubes. Our chum and I gave each other a big bear hug, and I palmed the goods, accepted his cheery well-wishing, and sped my way home, with nary a peek at the jar.

Imagine my surprise, then, when I unveiled the jar and found — a scant few milliliters of hoo ha! The turkey baster was the symbol for alternative insemination for years, I thought for good reason, and so now I was fully prepared to don hip boots for the job. Just earlier that same day, in fact, I was fingering the little dimestore syringe we had, asking the beloved whether it really would do the trick, etc. While more hep to these sorts of matters, let us say, she still couldn’t quite recall on a milliliter basis what we could be looking forward to. We consulted and re-consulted our lesbian conception and pregnancy guidebooks, and confirmed that the wee 10 mil syringe would be all we’d need.

My beloved was sanguine about it all, but I was apalled. “What the hell?!” I held the jar up to the light to be sure I wasn’t missing out on volumes and volumes of our future kid.

“What?” she said, feigning innocence. This was all going to go well, dadgum it, as god was her witness.

“Sweetie, I think that is it all.”

“But all that stuff about a turkey baster! What the hell is that about?! An entire rugby team on Viagra couldn’t supply enough hoo-ha to fill a turkey baster! It would slither right out of a turkey baster and the turkey baster wouldn’t even know the difference!” All my life I hadn’t cared a jot about the reproductive capacities of my bretheren, and now I was taking it all personally. And not a little ungratefully.

“I’m sure it’ll be alright,” says the beloved. “I can’t really remember now how much fluid comes out. But we’ll make good use of whatever’s there.” Which of course we did. Also, like our alt. inseminating sistren from coast to coast, we breathed not a word about our initial surprise at the quantity. Quality is what counts, after all, and it’s not like ragging on your donor chum (“Dude! Is really that all you can muster?!”) is going to actually have a positive impact on the quantity anyway. In fact, looking the gift horse in the mouth, as it were, is very likely to have quite the opposite effect.

I became adept at extracting whatever was extractable from the de-socked artichoke jar over the course of dozens of inseminations — counting the multiple times we inseminated during each ovulation, and then the number of months we tried, what with two different donor chums, one miscarriage, and two kids. Even at its most copious, the volume we were working with was four milliliters (indicated by the amount I have pulled back in the photo above).

I should note, for the record and for our sistren yet to tread this path, that two milliliters, or half a teaspoon, is considered normal output. Total capacity on a turkey baster? That would be thirty milliliters.

Mmmm yup. Elephant inseminations, sure. Human, not so much.

I’m sure the turkey baster will remain the symbol of low-tech alternative insemination into perpetuity, though. And why not? Maybe likening the human male’s reproductive output to that of an elephant increases the appeal of donating, and therefore the number of donor chums in the world. And if so, great. Because when I look at our kids, I think: it will take me a lifetime to express the gratitude I feel, and even then, it won’t be enough.

In the eye of the beholder

32 thoughts on “The turkey baster has no clothes”