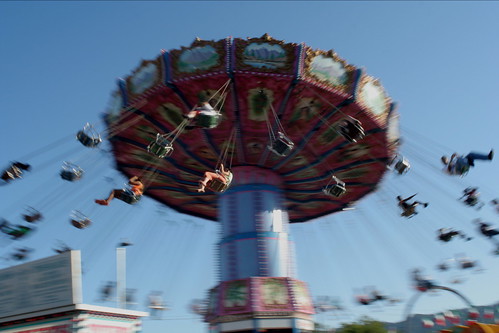 Nearly two years ago, my beloved and I took our daughter, then ten months old, to the Alameda County fair. It was a hotter-than-July hot July day, not a fit day for anything but lizards to be out of doors. The temperatures in the Livermore Valley, which is sidled up next to California’s oven-hot Central Valley, regularly stretch up into the upper eighties that month, and have been known to peak at 115 degrees. But we were joining my sister, and my father, and my cousin, on a mission: Help my sister’s seven year-old son make it through his first county fair visit without his older brother. As with so much at that time, the thought of not going — because the pain would be too great, the associations too accute — was harder than going. Because to not go would be too sad. Just over three months following the cancer death of her first child, my sister was heroically navigating the impossible: protecting and preserving what she could of her surviving son’s childhood, as she helped them pick their way, shell-shocked, through the smouldering remains on the other side of their lives.

O, I could just stop there. Often do. Brain just comes to a full stop.

But. People continue, and there they were, continuing, and what could we do but simply continue alongside of them, as close as could be.

That day was an Auntie Decathlon for me. I was bound and determined to go ride for ride with Patrick. Any ride Erik would have gone on with him, I went on. Or tried really hard to get myself to go on. Since, after all, there are two kinds of people in this world, people who love rollercoasters and people who loathe them, and I am, not at all proudly, of the latter camp. Have been since I was my nephews’ age, so at least I can say that it’s not like I lost my youthful joie de vivre. That day I tried to swallow back my discomfort, and my nausea, and my healthy fear of creaky mechanical objects that hurtle people’s bodies recklessly through space, probably with shabby safety oversight. I didn’t ralph up my cotton candy, didn’t faint from heat exhaustion. Neither, fortunately, did our wee lil’ monkey, who remained plastered by the heat in her stroller most of the time. As much as a day like that could have been seen as a success, it was a success. The Ferris Wheel, the Tilt-a-Whirl, the Matternorn. The Scrambler. Though with great regret, I did have to say no to the Zipper. Patrick was a prince about it. Never cajoled, never complained about my reticence or my agedness, sweetly and kindly appreciated whatever it was I had to give. Lordy do I love him.

We closed the day with a ride on the Swing Chair. Finally, I thought, a ride that I might actually choose to go on myself, even if I weren’t doing the Auntie Decathlon. Just because it looks fun. Also called the Chair-O-Planes (or the swing carosel or the wave swinger), this ride swivels a dozen or two chairs, which are suspended from an enormous saucer by chains, in faster and faster circles, so that a mounting centrifugal force begins to spread them out like the stretched fingers of a hand. Oh, then the saucer tilts a bit, to make it all a little thrilling. Seemed fine enough to me, as I espied it from on solid ground.

Except that, oddly, of all the rides I’d been on that day, this one turned out to be the scariest. It could have been because the chains looked a whole lot sturdier from way down below. Could have been because the chairs themselves looked a whole lot sturdier from way down below. Could have been the unsettling, vaguely Satanic, groans-from-hell sound emanating from the machinery as we swiveled ever faster and faster. Could have been that it was the last ride of the day, and my amusement park courage was all used up. Or maybe it was the thought that came to me whilst swivelling around on the ride. Because as it rotated faster and faster (and Patrick, as evidenced by the sundry whoops he let out from his nearbly chair, was becoming happier and happier), all I could think about was what would happen if somehow a terrible accident happened, and I got flung clear into a treetop or further, and didn’t make it. What would my daughter do? I didn’t imagine anything terrible befalling Patrick, probably because I simply couldn’t abide the notion of lightening striking twice like that in the same immediate family. But I did think about something happening to me — or, more precisely, my one chair or my set of suspending chains — and mainly I thought of my daughter. And I realized: Wow. I am a parent now. I really am a parent.

Of course I had ample opportunity to realize I was a parent many times over during the previous ten months. Like say for example, all day long every day, and punctuating every night. But those moments of parental realization were the kind that came as I was responding to daily and hourly exigencies. They were specific, and activity-based. All the new things I was learning how to do. All the emotional skills I was learning to draw upon. On that late afternoon on that swing chair, I had the opportunity to feel a brand new, overarching kind of feeling, and at a visceral level: my life is now worth something new to me, because of its supreme worth to another. I cannot die early, I thought to myself, because my daughter needs me to outlive her childhood.

There I was, watching the buildings and the people down below and the treetops all blur past me, at a 30 degree angle, realizing: I need to stay here. I need to remain alive, and for a good long time, for at least as long as my mom lasted (thirty years into my life); ideally longer. When the healthy fear of the shabby swing chair machinery began to well up in me, prompted, I’m sure, by increasing Satanic groans, I took long, slow, deep breaths, and then exhaled them in love to Patrick. Thought: in these moments, he is simply alive, swirling on the ride, and that is bringing happiness to him, and that is good. I had no choice but to trust in the machinery for the duration of the ride. When I got off, I squeezed Patrick around the shoulders, then made a beeline for my daughter, by then a moist lump of warm clay in the stroller. Patrick turned around and took another ride with my beloved now as his wingman. (As it happens, when she returned, she reported the same striking realization.)

Since that afternoon I have been aware of these cautionary thoughts whenever they come — that I must be more careful than usual, say, on my bike, zipping home from work, contemplating a burst of speed through a yellow light. I drive more carefully, when I drive. I drink pomegranate juice, for the anti-oxidants. For my kids. Things are different now.

6 thoughts on “Things are different now”