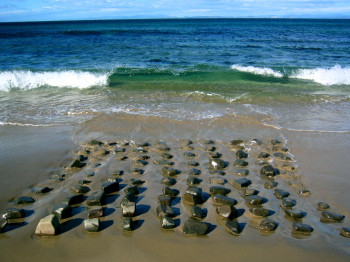 A hundred stones on a beach in Tasmania, placed and photographed by a blogger (far more imaginative and intrepid than me) to symbolize and celebrate a hundred blog entries (click the photo to link to them).

Warning! Warning! It’s a blog meme. Or at least I think it is. I’m still enough of a blogospheric rookie that I had to Google it to be sure what it was.

Herewith, on the occasion of my hundredth post, Ten Lists of Ten, which I’ll be rolling out throughout the week in fits and starts. And by rolling, I mean the kind of rolling effect you’d see if someone balled up a mastadon and then pushed and pushed. Not the baseball going down a steep paved street, and it’s your turn to get it kind of rolling. I refer us all to my earlier reference to the fact that I am the very opposite of prolific, and am engaging in a high-spirited daily expunging of text &/or image, just to make all this wild wacky Weblog Awards voting seem worth the effort to both of you — you, Dad, and whoever you buttonholed to keep finding fresh wired computers in this and neighboring zip codes, over and over again. Not that I’m paying ANY attention to any of that.

Now back to the matter at hand. With this Ten Lists of Ten thing, I will try to get each list of ten to be reasonably reflective of the kind of patter I usually issue forth with here. And since I am infinitely fascinated by the universal attraction to diametric oppositions, the first List of Ten will be:

1. People who would dive head first after a ball on the field and people who would never begin to consider such a thing unless a bomb or their child or a lattÃ© were glued to it.

2. People who pause, read, and memorize descriptions on the “lost pet” flyers, and people who don’t.

3. People who knew my mom, and people who didn’t.

4. People who are confronted with a choice like this: 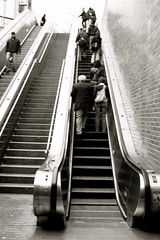 5. People who actually wait to hear your answer when they ask “How are you?” and people who, if they happen to listen following the question, are totally surprised if/when you answer truthfully.

6. People who snicker when they hear someone call out “Frau Blucher!” and people who say “Gesundheit.”

8. People who find the humor on the other side of this link funny, and people who don’t, aka me. And that’s something, since one of my favorite “lightbulb” jokes is:

Q: How many feminists does it take to screw in a light bulb?
A: That’s not funny!

9. People who divide people up into two artificially opposing camps and people who don’t.

10. People who proofread everything they write before hitting “post” and people who

O this is so fun I may just have to add to the list from here to eternity. Stop me if it all starts to make your head hurt.

A.P.B.: You don’t have to have a lump to have breast cancer