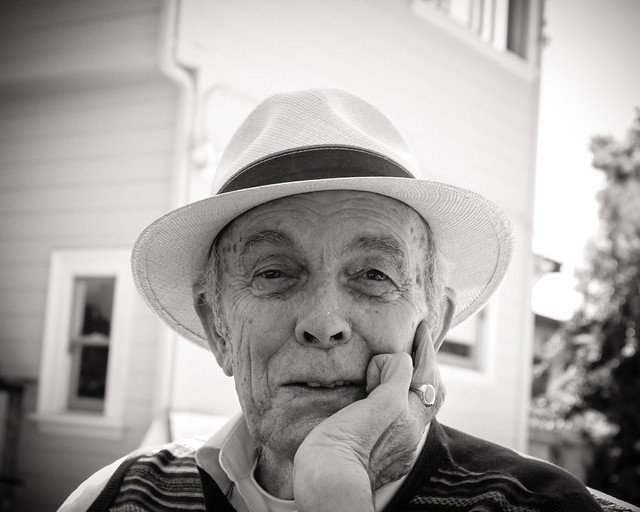 Dad, not quite a year ago, in the Easter bonnet I got him. OK not bonnet, but that’s how we jokingly referred to it.  Tried to get it on Easter, and the hat shop was closed (duh), so we went the next time he was in town with me. Hats like these are made for gents like my dad.

Thinking a lot about him today.  He is more gone than here, more out than in. Thus, the heightened value of stolen moments like this one, showing me him and his love, utterly present.

He would never ordinarily feel this unselfconscious in front of a camera–would always stiffen and pose uncomfortably, the ineffable essence of himself evaporating in a puff.  This image exists because I held the camera against my chest, and–yes, I’ll admit it–took three or four pictures stealth. He was looking into my eyes, not at the camera’s lens.

We sat under a shade on a sunny June afternoon; he’d just finished watching his youngest grandson “graduate” preschool in a ceremony the school held in our backyard with all the other kids;  he hadn’t tired yet. We had been talking about something or another which I totally forget now. Something that made him smile like this, mostly with his eyes, which have been capable of reflecting and inspiring so much mirth for so many decades.  And there he was. Being him. 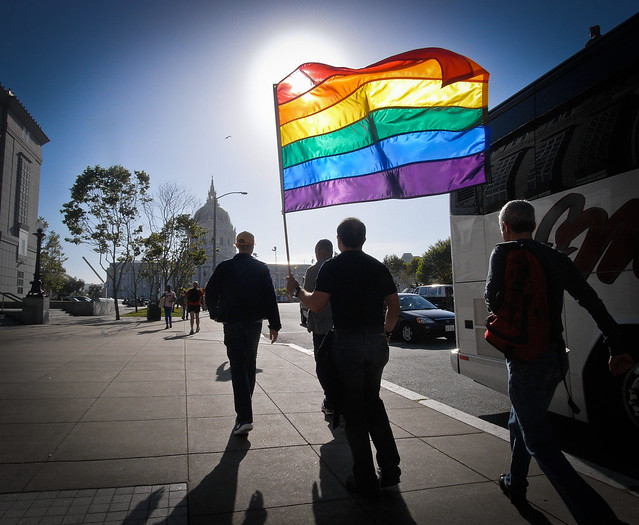 A blast from the past. This has been such a long, tiring journey. Which of course is basically par for the course when the job at hand is to wrestle institutionalized and codified discrimination out of law. Thus “civl rights battle.” For more scenes from this day nearly four years ago, a slide show: 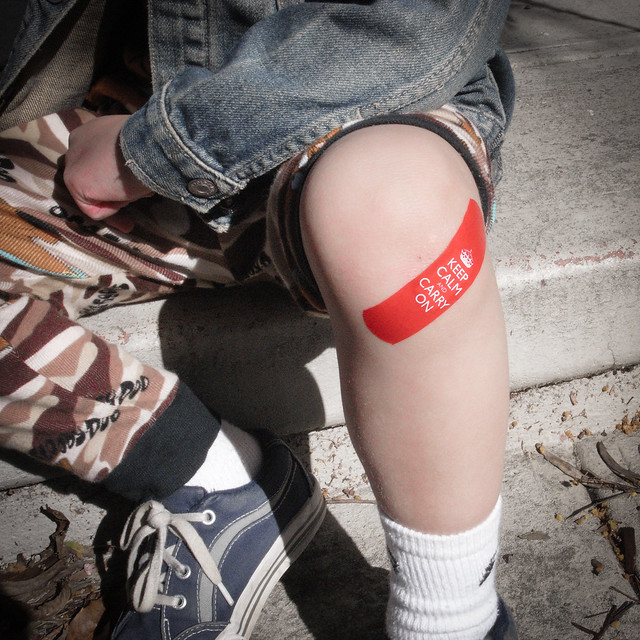 I posted this self-same picture almost a year ago, soon after I took it. His knee is bigger now, and he no longer fits those shoes. But he still believes kisses and Band-Aids contain some kind of inherent analgesic power, and until that belief is shaken, I’m not contradicting it. Though if I were to amend the WWII-era British admonition, I’d say, “Keep heart as open as can be, always leave the door open to hope and magic, and then do your best to carry on. Taking comfort in the knowledge that others are treading similar paths somewhere in the world, and that love, no matter what the plot of the story, is always its last word.”

A week from tonight, our family will be on the other side of a ginormous milestone: both kids’ first day of school at the actual same school.  So whilst I’m on vacation, otherwise blithely posting pictures of our leisure hours at nearby mountain lakes, I need to update and re-post  last year’s Back to School round-up.  Broke links fixed, some of last year’s references are trimmed out, and a few new notes sprinkled in.

Last year I combed through and updated all twenty-some-odd links on the LGBT Parenting Resources page I list here at LD.  If you haven’t perused that page, please do. Or if you have a friend who is hunting down a compendium of resources, by all means send ’em there. And let me know if you think I should add more.

Below, a compendium of some of my favorite resources, with accompanying commentary. The first several listed can help inform your conversations with your child’s teacher or school administrator, or provide book lists for your school’s librarian or a teacher looking to supplement reading for units throughout the year. The Groundspark documentaries can be screened for a PTA or a school committee or (in the case of That’s a Family!) a classroom.  And the Welcoming Schools resources really form a broad-based family diversity (and anti-bullying and gender diversity) curriculum that could be reviewed and implemented anywhere from the level of a single classroom lesson plan to a whole school or school district’s supplementary curriculum. Because my kids are elementary school-aged (aaak! both of them now!), most of those listed below are primarily K-6 resources. 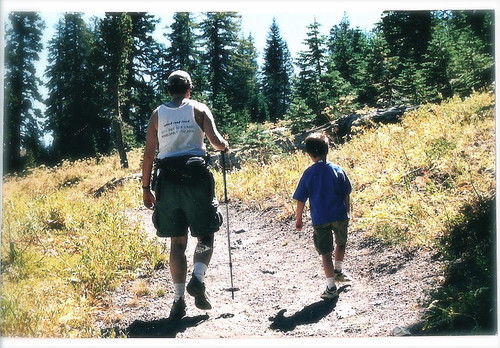 Above: my nephew and me, a very long time ago.

About nine months from diagnosis to death.

Survived by his parents and his younger brother, who at the time was the age my daughter is now. Survived also by two grandfathers, two aunts, an uncle, several cousins, and dozens of friends, teachers, coaches, parents of friends and, collateral of the last nine months of his life, a great many doctors and nurses, mostly at Children’s Hospital, Oakland, who came to know and love his spirit, bravery, and generosity.