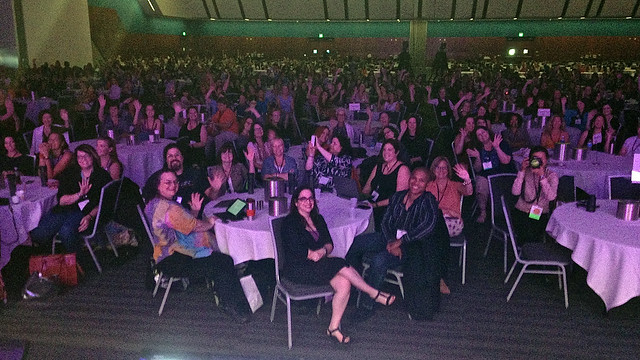 Don’t they/ you look fine?

The woman toward the right with the nice DSLR pointed at me is Danielle Tsi, BlogHer’s event photographer (and a brilliant one).  I’d worked with her at about a half a dozen BlogHer events, and she was kind enough to take my new cutie mirrorless camera and take a few pictures with it for me, so’s I’d have a clue what I was looking’ like (et voilá).  What’s not to love about a person whose generosity matches their talent?

On the occasion of its tenth annual conference, folks at BlogHer had asked ten longtime community denizens to take ten minutes to reflect on the past ten years online (and to imagine where we may be going in the next ten). I was honored to be among them.

I thought I might publish here what I read that night, for any of youse who were there and wanted to get a reminder, and for any of you who didn’t go, but might be curious. If I find out I have permission (nettiquette FTW!), I might embed the slides which I produced, but which were polished off by BlogHer’s designer & thus might be theirs.  If I can’t, your imagination will have to fill in the blanks. Which people’s imaginations generally tend to do anyhow, so.

Herewith, my ten minutes’ of reflection, courtesy BlogHer’s YouTube channel. Below the embed is the text, complete with slide cues, because this is cinema verité here, people.

First, thank you. Thank you Elisa, Lisa, and Jory. Thank you Stacy, and thanks also to the many very hard-working women behind you for this stage and what it has meant to so many of us over the years. I know first-hand what it takes to make this happen, and it is truly a labor of love.

Thank you also for the opportunity to reflect on the past ten years, from my point of view. I would sit in rapt attention listening to all sorts of people doing the same thing – in fact have, and will. It’s a great privilege to take a stab at it myself.

I can say in all honesty that two of the things most precious to me now, I owe to blogging: the clarity I have as a parent, and the opportunity I have to be doing the work I’m doing now in support of LGBT families in my community and online.

And it’s not an exaggeration to say that it all began on the BlogHer stage, 50 miles to the north of here and six years ago.

Six years ago, I stood backstage waiting to read a post at the first Voices of the Year. The ballroom was packed, but with about a third as many people. Backstage were a bunch of folks, none of whom I knew, even though I knew of them. We didn’t know what was about to happen. All we knew was that whatever it was, it seemed like a damned good idea.

I had spoken in the morning on a panel moderated by the inimitable Lindsay Ferrier.

[SLIDE: Lindsay’s pumps; riff; try really hard to not say anything untoward; resist the urge to speak randomly about muffins, as you are wont do]

Its title was “Is Mommyblogging Still Radical?”

Even though I was only two years into blogging by then, I knew we were all up to something big. And yes: radical.

[SLIDE: back to the Community Keynote audience]

I mean it was amazing! Any of us – really! any of us! – could take up these two incredible tools of communication – the essay and the photograph – mash them up with graphic design, and then do whatever we wanted with them. And not just that! It wasn’t just our hearts and minds in a monolog. The whole point was to invite a dialog! Cultivate a salon! Build a community! Marshal life-changing support, even!

The price of admission? Not a distant editor’s judgment, not a publisher’s willingness to invest. Just our own damn commitment. Our passion. Our chops. Our honesty. And perhaps more than anything else, our willingness to try and fail in public, and keep at it.

That kind of opportunity is breathtaking on the face of it, but even more so for a whole group of people with a lot to say and a long history of not being heard.

[SLIDE: Harold and His Purple Crayon]

Back then, I could find only a few dozen other LGBT parent blogs. I would hop from one to the next, sidebar blogrolls and links in comments as my guide. Now there are hundreds and hundreds of individual blogs, and some really excellent group-authored sites providing platforms for parents like me to explore all the richness – the sameness and the differentness – that queer parenting entails. Years ago I felt like a lone Harold with my Purple Crayon, drawing myself my own trim boat and my own little sea. I was writing, as so many of us do, the very words I needed to read; growing the crops I needed to nourish myself. But now there are now countless, wild criss-crossings, a riot of storylines, more than enough to provide a lifeline to someone reaching their hand into the inky depths of the internet to find one.

My own blogging has waxed and waned, buffeted by the kinds of dilemmas all personal bloggers face: how do you keep writing through emotional pain? How do you protect the privacy of those around you and still say the deepest, truest things?   How do you evolve the narrative of the blog when the story of your life expands past its margins? Sometimes, maybe even too often, the question is simply: how do you find the time, when life is so big, and so short?

But no matter how long I pause as I consider these questions, I always return to writing. Because no matter what it takes, no matter how late I have to stay up to finish, the truth is that I always feel better after publishing a blog post. I have to work hard to make those words worth the reader’s time, and that process inevitably deepens me, humbles me, steadies me. The examined life of a blogger is way worth the effort it takes to live it.

When my own blog has its 10-year anniversary party in two years, I know what will get me there, what will sustain me, will be the lessons that blogging – and the people I’ve met at BlogHer conferences – have taught me. Here they are, bundled into a group of ten, special for the occasion.

1. We are never alone. Regardless of how unique our circumstances, we will find someone akin to us online, even speaking in a voice we could swear was our own. This realization alone is more precious than the cash value of all the electronic devices in this room. Times a million.

2. This breakdown in isolation is live-changing for LGBT people. Maybe you’re a young person coming out in a socially conservative small town. Or you’re a couple in a city, trying to envision how to build a family when there are so many ways, and none of them simple. Or your kid came home from school crying because someone teased them for having two moms? You may not find someone in your community who knows the answer, or even what you’re going through, but you sure as hell will find someone, somewhere, online. That is life-changing.

3. Our differences separate less than we think. In fact they can be the very thing that joins us together. The dad bloggers I had initially expected to get all up in my grill about shoplifting their fatherhood – “It’s a zero sum game, bub! Only so much ‘Dad’ to go around!” * – not only were they not irate, they got me! In a way I totally didn’t expect. They welcomed me with open arms and a hearty “Hail fellow, well met!” Bowled me over. Doug, John, Brian, Charlie: I love you, man!

4. We cannot see what others are capable of. Until we give them the chance. I was so worried at my first BlogHer, back in 2008. I had no idea so many women I’d never met would be not just sympathetic, but supportive. But it was because I hadn’t been seeing them: I was just seeing a fear I was projecting on the inside of my shut eyelids. When I stepped out onto that stage 50 miles and six years away from here, I opened my eyes and looked, and saw people, listening, with open hearts and minds – and everything changed. What began as a mission to be seen became the first steps on a long journey to really see others.

5. You will find allies in unexpected places. That summer of my first BlogHer, in 2008, the battle over Proposition 8 was tearing this state apart. I met dozens of women at the conference, and I doggedly collected their cards, wrote them, and asked whether they would post my No on 8 fundraising button on their blog sidebars. Everyone did something, and between all of us my Act Blue fundraising channel was the most effective individual Act Blue fundraiser in the state. We earned more than $16,000 for the No on 8 campaign, and while that amount didn’t tip the scales back then, the capacity to rally it taught me a powerful lesson: this shit is real.

6. We are creating culture with every blog post we publish. I wanted a parental name other than mother or father. I borrowed “Baba,” shared that in my blog – and repeated it relentlessly enough that it gradually became a thing. It has entered the queer lexicon as a parental name for a butch/ mannish lesbian parent who’d rather not be called Mama. Lo these years later, I meet folks all the time – particularly younger queer folk – who use the term as if it had been always in use, as if folks like us could always find one other. Blogging did that.

7. Parenting will never be the same after blogging. And that’s a fantastic thing. No parent will feel totally isolated; imperfection is demonstrated, sometimes even championed, daily. All of us who feel ourselves to be anything less than ideal – which of course means, ALL OF US, can do this precious work with more help, less shame, fuller hearts.

8. Microblogging and social media won’t kill blogs.   Just won’t! Any more than tapas has slain the multi-course meal. Every experience and idea simply cannot be crammed into a small space. Some, yes. Much, no. The human attention span may be hacked away at mercilessly, but lard love us it will persevere!

9. We will always be drawn to one another’s stories. We always have been. And this medium is an exceedingly effective, democratic vehicle for that.

10. Love and courage really do abound. They are coursing through all of us, especially the most ordinary of us. We know this for a fact because we keep reading about it in each other’s blogs every single day.

Thank you all for helping teach me that. And please: keep blogging.

* At this point in the proceedings it must be noted that I did indeed step to the right of the podium and grab my crotch. Whatever restraint I seemed to have employed at the image of Lindsay’s shoes seems to have fled me at that point. Sigh.