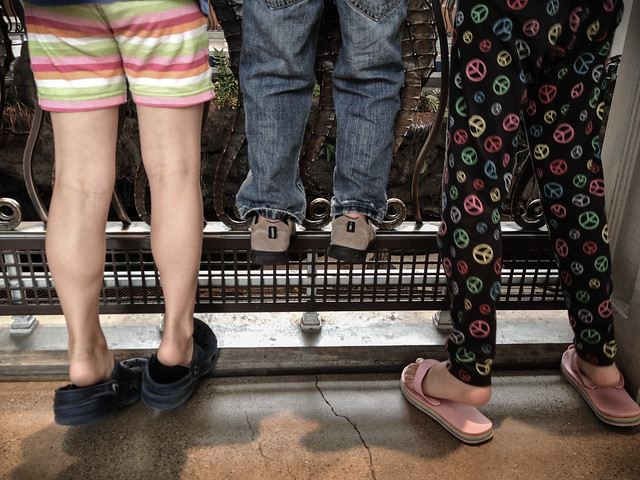 Story of his life, so far. And it ain’t a bad one. Sandwiched between, trotting to catch up with, scheming to annoy, and otherwise organizing most of his leisure hours around activity with his older sister and either (a) their older girl cousin, whom we live with, more or less, or (b) the neighbor girl up the street, daughter of the nice lesbians, or (c) another chum of his older sister’s, usually a girl but sometimes a boy.

Other much less frequent options include hanging out with his next door older boy cousin, who’s now 12 years old and can rarely be sighted in the lingering presence of those this much younger than him, or with one or another chum of his from preschool, which does happen, but not nearly as frequently as we’d like, what with the both parents working their arses off and having very limited capacity to make nonstandard childcare arrangements thing. Still, he’s an astoundingly happy, well-adjusted young person.

Downside: he spends a lot of time running to catch up and often molds his likes and dislikes to conform to those of his big sister. Upside: he’s extremely comfy and at home with women older and (at least at this point, due primarily to the unfair advantage of years) wiser than him. He could do worse. Actually, he’s following in the footsteps of his mama, whose extreme comfort with older women led her to yrs truly, and look how splendidly that turned out.