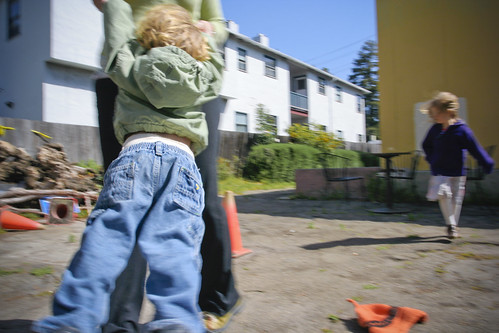 Swirling around behind the cafÃ©, Berkeley, CA.

Last year at this time, I went on a month-long prose diet and posted nothing but pictures. Â Sure, I sprinkled a little text in here and there. Â But the object was to stick to images, and cut down on the words for a while. Â I needed to clear some time for my paid day job work, and I could use that this year, too. Â But the time away also pays other dividends: last May, the photo-only time gave me a chance to step back a little and see what it was I could and should be doing on and with this blog; I refreshed andÂ refocussed. I hope the same for this May.

You can blame Looky, Daddy! He gave me the idea, and does it in February.

May is unlikely to be a dull news month. Maine [added later, upon michaela’s crisp reminder! how could I have spaced it!], New Hampshire and New York may become the fifth and sixth states in the union to legalize same-sex marriage (poor CA has the ol’ Barry Bonds asterisk). Â And the California Supreme Court’s pending decision on Prop 8’s validity is hanging over us all like the contarn Sword of Damocles. Â When it drops is anybody’s guess. The Supes might want to sit around and wait for the better part of the Northeast to legalize gay marriage first, and for more news outlets to pick up and digest the significance of the recent Times/CBS and Post/ABC polls showing a majority supporting same-sex marriage.

(This of course is my fantasy scenario: one — just one! that’s all that’s needed, in my fantasy scenario — fence-sitting justice who can’t ignore the proverbial “alligator in the bathtub,” the majoritarian hue and cry, and is waiting to feel as if the momentum of popular opinion is so clearly on the side of justice for LGBT people on this one, that s/he won’t actually be recalled at the earliest opportunity. Seems like I’m not so far off from Kate Kendell on this.)

Or they may get all sentimental and announce their Â ruling on or near the one year anniversary of their ruling last year. If so, Thursday, May 14 would be the day before last year’s announcement; they announce rulings on Mondays and Thursdays, with notice on a Friday or a Wednesday at 10am.

The last possible day to announce would be Monday, June 1. Â Who knows. Maybe they’re procrastinators.

At any rate, chances are likely that I’ll interrupt the month of quiet at some point to either fulminate or celebrate. Bracing for fulminate. Â Of course I could just be speechless, in which case this whole prose diet thing will work fine.

I’ll be saving up vignettes and ideas and whatnot for a return to prose posting again on June 1st, which will beÂ Blogging for LGBT Families Day, Â Dana’s annual, group-authored love letter to our families. Â ‘Til then, I’ll do like I did last year: Â I’ll post a picture every day of the work week, and a Weekend Bonus Shot black & white jobbie on the weekends. Â The only thing different this year is that I am now sucked into the Twitter vacuum (Twitteruum? Vaccer?). So Â I may Tweet just an eensy, teensy, itty bit.