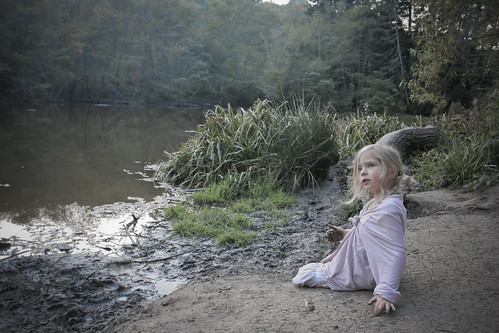 Which is what the lil’ monkey did this afternoon at one of our favorite local getaways.  And it’s pretty much what all the queer people and their allies are doing in the aftermath of the various anti-gay election results two weeks ago.  Okay, making mud pies is a bit demure (though it does provide a segué from the gratuitious kid pic that the people were clamoring for, okay, not people, just SJkny).

Fed up people are kicking up a mudstorm.  A nation opens its heart and mind in so many quarters (all kinds of other social issue propositions went lefter than righter this time around).  And then in this one quarter: yow.  A big win for the Conservative Right cabal on one of its top three vote-getter-outter issues.

Except.  The reaction it has stirred makes it clear that the battle was won, but by no means the war.  Again, apologies for the infernal martial lingo, but that keeps feeling like what it’s been.  An attack.  (Don’t take my word for it; listen to freshly out WANDA SYKES!  fer chrissakes!  We KNEW we loved her!  And now we love her more!)

And if it was a cliff-hanging nail-biter before, in the months and weeks leading up to the election, then it’s gotten yet more cliff-hangerey nail-biterey.  Since now the California Supreme Court has been urged by the Attorney General to consider the now six lawsuits filed against the Proposition.  Day one following the election saw three suits filed by the ACLU, Lambda Legal, NCLR, Gloria Allred, and the City Attorneys for San Francisco, Santa Clara, and Los Angeles.  Then days later the Asian Pacific American Legal Center, MALDEF (the Mexican American Legal Defense and Education Fund), Equal Justice Society, California NAACP, and the NAACP Legal Defense and Educational Fund filed suit, and most recently the interfaith California Council of Churches and the Episcopal bishops of Northern California and Los Angeles. (CA Supreme Court Prop 8 filings page.)

So far as I understand, the Court will decide very quickly whether they’ll take the AG’s advice, and then thereafter — should they decide to hear the suits — schedule hearings.  My only personal request: that the whole shebang is resolved (ideally of course in the direction of justice and a more perfect union) before Obama’s inauguration so that I can more fully enjoy THAT event, since election night was besmirched.

Last in a splotchy string of notes: here’s ongoing resource, if you’re interested in a clearinghouse site for these goings-on.  Visit the Marriage Equality resources wiki to find  info about upcoming town hall meetings and community forums among a great many other marriage equality-related items.  Town hall meetings are happening nationwide on Thursday, Nov 20 — that’s this Thursday. This phase of the whole marriage equality fight is notoriously without clear national-level leadership, and its defining themes are emerging essentially in public and via online networks.  Help shape it;  check the community forum near you.