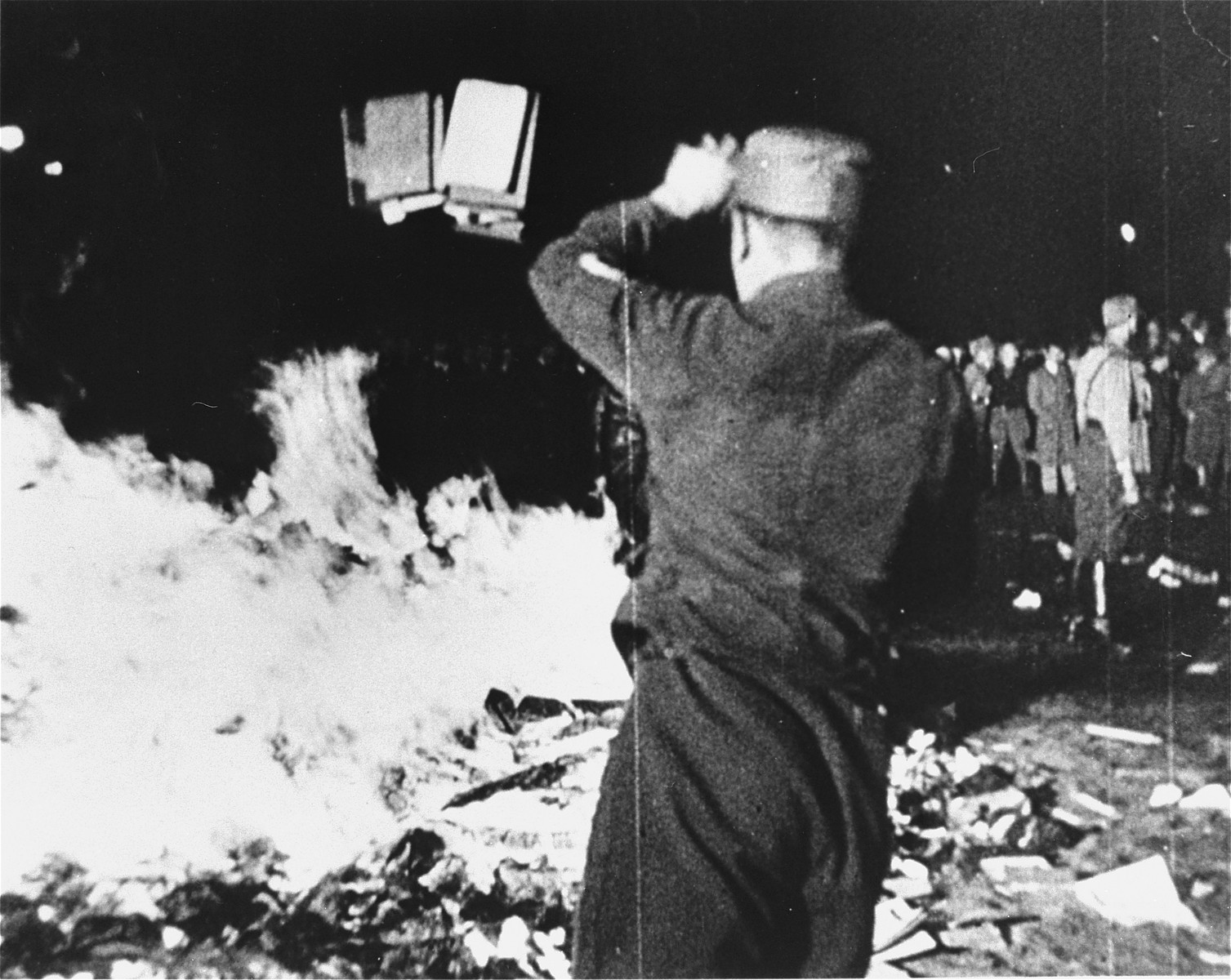 The image at right is a chilling one. Most people, if they can identify it as an iconic symbol of the rise of the Nazis, imagine that the books being burned are those of Jewish authors, or others considered enemies of the Third Reich. Many of the authors of the books were Jews. But that’s only partly why they were being burned.

This image, part of the public domain and held in the U.S. National Archives, is of newly empowered Nazi Party members burning the contents of the library of the Institut fÃ¼r Sexualwissenschaft (or Insititute of Sex Research) in Berlin on May 10, 1933.

The Institute was the work of Magnus Hirschfeld, a German Jewish physician and a pioneer of the gay rights movement (Wikipedia entry on him here). In 1897, he co-founded what is considered to be the first gay rights organization in history, the Scientific-Humanitarian Committee. More Wikipedia-sourced synopses here:

In 1919, Hirschfeld had also co-founded the Institut fÃ¼r Sexualwissenschaft (Institute for Sex Research), a private sexology research institute. It had a research library and a large archive, and included a marriage and sex counseling office. In addition, the institute was a pioneer worldwide in the call for civil rights and social acceptance for homosexual and transgender people.

In late February 1933, as the moderating influence of Ernst RÃ¶hm weakened, the Nazi Party launched its purge of homosexual (gay, lesbian, and bisexual; then known as homophile) clubs in Berlin, outlawed sex publications, and banned organized gay groups. As a consequence, many fled Germany (e.g. Erika Mann, Richard Plaut). In March 1933, Kurt Hiller, the main organizer of Magnus Hirschfeld’s Institute of Sex Research, was sent to a concentration camp.

On May 6, 1933, Nazi Youth of the Deutsche Studentenschaft made an organised attack on the Institute of Sex Research. A few days later the Institute’s library and archives were publicly hauled out and burned in the streets of the Opernplatz. Around 20,000 books and journals, and 5,000 images, were destroyed. Also seized were the Institute’s extensive lists of names and addresses of LGBT people. In the midst of the burning, Joseph Goebbels gave a political speech to a crowd of around 40,000 people.

The Wikipedia entries provide tiny distillations of these ink-dark years, which can be more thoroughly explored in such books as James Steakley’s The Homosexual Emancipation Movement in Germany, and Richard Plant’s The Pink Triangle: the Nazi War Against Homosexuals (One of which is listed in the bibliography following the Hirschfeld entry.)

“Those who cannot remember the past are condemned to repeat it,” wrote poet-philosopher George Santayana in 1905. Over a century after he wrote them, his words still ring in our ears. Or should. Among other things, the scene in the Berlin Opernplatz represented an attempt — and a fairly successful one, at that — to snuff out the living memory of gay community in Germany. I’d wager that most queer people alive today, unless they’re historians, have little idea what degree of community and organization characterized gay life in Germany before the Nazis. By most accounts, it rivalled US gay culture pre-AIDS.

What connection, if any, might there be between this sobering history lesson and the feverish activity of one library book-poaching, anti-homosexual vigilante in Maine? It’s entirely possible I am overreaching even in implying a connection; rattled as I am after too many recent news items in which “upstanding” straight citizenry take it upon themselves to “protect” children (theirs or others’, including kids of LGBT people), from any information regarding the existence, much less the moral rectitude of gay people. But I can’t keep the image of Hirschfeld’s burning library out of my mind, nor the visceral sense that a scene like this is the logical — if extreme — extension of what’s afoot all across the country when “moralists” attempt to remove gay-positive books and curricula from the public eye. It is not a road I want us to take even the earliest steps on.

I’d love to be wrong. But if I’m not, then we have our work cut out for us.

[Love to you who observe Yom Kippur.]

5 thoughts on “Lest we forget”