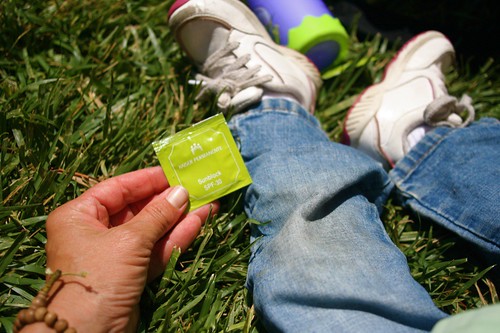 This year my Pride began in a friend’s church, of all places — though I think we can all agree that the Unitarian Universalists are not your mother’s church. I had contributed to the service (offerings? program?) by sharing a “reflection” on gender, as seen through the lens of parenthood. From a pulpit! Yow! I couldn’t keep myself from finding an opportunity to wag my finger once, and my only regret now is that I couldn’t find a way to work in Ian McKellen’s deathless lines from Cold Comfort Farm, “There’ll be no butter in Hell!” When the collection plate was being passed, the pianist played The Kinks’ “Lola.” Gotta love those UUs.

By the time we got to the city we missed not just the Dykes on Bikes, but the family contingent, which had a berth of #28 this year (out of 194; it is San Francisco Pride after all). So we packed the bairn on my shoulders and made a beeline to the “Family Garden” Â playground area. There we hung out with friends and their kids, and met my dad, my sister, and my nephew, who had ducked out of the church early to try to catch the umpteen blocks of revving motorcycle engines. Thanks to Our Family Coalition and COLAGE, we watched our kids’ faces get painted, we tie-dyed T-shirts, and we marvelled (again; for the third year now) at how many families there were, across such a broad chromatic spectrum. After a full day–sans nap–we left the city well before dark. As I was watching my daughter slowly make her way up the sidewalk to our home, hand nestled in my nephew’s fingers, I pondered the stark contrast of this scene with — pick the scene, any scene, following any other Pride I’d been to over the past two decades since the early years.

My first LGBT Pride was only a G-one; back then Prides were just evolving to L&G, but it was a while before they matured enough to include B, and finally T. Was it 1985? My first sweetie and I, out to only each other, and for just a few years, were so nervous about being at Pride that we went under ostensibly heterosexual auspices. A straight politico friend of ours hooked us up with a gig fundraising for Berkeley Citizens’ Action, the lefter of the city’s two left-wing political coalitions. We sold HÃ¤agen-Dazs ice cream from stands that were positioned conveniently within sight of the post-parade mainstage in Civic Center Plaza, on which at one point the legendary Sylvester performed the disco anthem “You Make Me Feel (Mighty Real).” That morning I had rummaged my closet for something, anything respectable to wear, and had come up with a t-shirt I had purchased at one of the Berkeley Anti-Reagan Festivals (better known by their acronym BARF; they were held annually during his presidency). It commemorated Anna Blum’s all-women’s expedition to Annapurna, and on its back was the racy slogan “A woman’s place is on top.”

I feel I can say with reasonable certaintly that I probably kissed my sweetie in public for the first time that day.

Imagine my titillation when an as-then still-closeted young English professor from campus strolled up to my stand to buy a cup of Vanilla Almond Fudge. We made a flicker of eye contact and, at least as I recall it, when she saw the recognition in my face, and when she moments later placed me as an undergrad in her department, she looked away and scurried off without her change. Ten years later she had tenure and could be found traipsing the august halls in a black leather mini-skirt. Kid you not. Had she sported that kind of attire earlier I might have given Chaucer a second look. Bathed every veyne in swich licour, indeed.

At dusk on Pride day, any given year after I’d been out a while, I might be a little tuckered out after a day in the hot sun, but usually only beginning to rev up for an equally hot evening. O, the Pride weekends past. The debauchery. Ice cubes on bellies on pool tables in crowded bars; O, the debauchery. Standing in lines that snaked around the block so’s to get into the A-list clubs, since substandard DJ-ing just wouldn’t do, and it would be years, years I say, before any concerns would emerge over the difficulty of hearing anyone speaking under a yell. The beer-sticky dance floors. The piles of leather jackets balled up in the corner, trying to look (for the moment) cheap enough to be not worth stealing. Because while it was worth finding the money to procure the jacket, it was still too hard to spare it for the coat check. O, the dancing for the joy of it, for the self — and for whomever else might be a-lookin’.

This year was the first in recent memory that I hadn’t even gone to the Dyke March, nor what’s grown to be the daylong galfest in Dolores Park in San Francisco preceeding it. Which absenteeism I must say is sacrelige. It’s sacrilege considering I snagged my beloved at one halfway across the country. I was jogging past her in cutoffs and boots (it was the 90s), bearing a white armband with the words “Sodom and Gomorrah Tourguide” Â scrawled on it, as I helped signal my then-adoptive city’s first Dyke March unpermitted through downtown streets. “That’s my old Women’s Studies instructor!” she reportedly swooned to a fellow straight gal pal, as they strolled the freshly liberated middle of the street with their lesbian chums in ribald feminist solidarity. That night, at the Dyke Ball, a fundraiser for our Lesbian Avengers chapter, she tracked me down in the kissing booth, after having watched me dance, happily, for the longest time, by myself. I’m sure I was dancing for the joy of the good music, but I’m sure also for whomever else might be a-lookin’. Well, she was a-lookin’, and it worked. Ah, young love; ah, the unbeatable babe magnetry of activism.

A dozen years later and back across the country in my hometown, said babe was the mother of my child, and feeling queasy and fatigued from manufacturing spleens and kidneys and cardiovascular systems for kid #2, in utero. So we heaved a sigh of resignation and took a pass on the Dyke March and its preceding galfest. Our lesbo parent friends across the street came over for BBQ when throngs of our kind — i.e., tens of thousands — were across the Bay milling, eating, drinking, comparing nipple rings, and exchanging phone numbers and emails. In our placid back yard, to the thumping tune of nothing more than a neighbor’s lawnmower, we watched our daughters romp and frolick. Crumpled up cotton toddler jackets replaced the balled-up leather jackets. If our kids were more martially inclined, they would have surely marched at one point, and then we could have said we actually had attended a dyke march. Or rather a dykespawn march.

And while we fully intend to go to Dyke Day in Dolores Park again next year (really, the scene up around the playground was lesbian dad heaven, and it would only be my sweetie’s 1st trimester nausea that would keep me from it), I can’t say I didn’t feel utterly fulfilled by the homebody evening we had with our lesbo parent chums. Nor was I disappointed the next day, coming home from Pride with the sun still high in the sky. There’ll be activism and debauchery in our futures again, I’m sure. Ours, or our kids’.

2 thoughts on “Plus ça change, or Prides I have known”