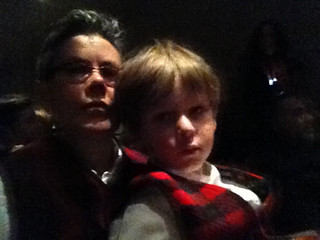 Scattered notes in attempt to pull together threads and make sense.

The day after the school shootings (I have such a very hard time even typing the more accurate term, “massacre”) in Newtown, CT, we went to Mark Morris’ The Hard Nut, a romp which makes it difficult to sit through an ordinary Nutcracker again. We’d gotten the tickets months ago. I held my son on my lap the whole entire time, had my arm around my daughter the whole entire time.

She was frightened during the scene when the soldiers fight the mice. The dancers had amazing mouse masks on, and when the mice were attacking the soldiers, they reared their heads back to reveal sharp teeth (merely part of the design on the cloth of the mask).  My daughter buried her head in my shoulder and asked me to tell her when the scene ended. Did the same again each time the mice came on stage.

That was a dance scene at The Nutcracker.

I have no doubts about whether I should tell her about what just happened to twenty children between her and her brother’s age. Not right now.

During the day the next day, Sunday, I took my son to a magic show put on by our school’s second grade teacher as a fundraiser for the school’s art program. Our school’s principal was there with her two children (a daughter and son, each the exact age of our daughter and son). I hugged her long and hard, and she readily hugged back.  I told her I would be hugging her as frequently as I could in the coming weeks, if that was okay by her. She said definitely, it was okay by her.

The weight on her shoulders, both mother and principal, is enormous.

There was a scene in the magic show when the magician gets a kid up on stage to lie flat on some boards propped on two folding chairs. Then he proceeds to remove what looks to be the support out from under the kid, and passes a hula hoop around the kid’s feet and waist, to show that there’s nothing propping the kid up. Done right, it pretty much looks like the kid is suspended in air. Which it did in this show. Only he has a fancy satiny red sheet that he folds up over the kid. All I could think to myself was: I hope he doesn’t put the sheet over the child’s face, too. I don’t think any of us adults in the audience could take that image.

Fortunately he did not. He’s a dad, too.

Sunday night, we had our annual multi-house holiday caroling party. Wassail; tons of fancy appetizers my sister-in-law cooked and tons of potluck food; toddlers, children, and tweens running underfoot or back and forth in the wet yard; my fey father-in-law in from Omaha, NE, anchoring all the songs with rousing, ornately flourished piano work. The more years we throw this party, the more folks come, so we must be doing something right. Appetizers and caroling chez my brother-in-law’s house, pot-luck dinner chez nous. Kids chez absolutely everywhere. My Pops is so hard of hearing now that even though he was seated directly next to the piano, he reported later that he didn’t hear much. Still, he and I followed along the songs just the same: I would point out which one we were on, he would glance at it, then look up and out to the rollicking crowd, and smile.

Our elementary school principal came with her two kids, too.  I met her years before she became principal, at the early Family Diversity Task Force meetings called by our local LGBT family org to work with our district. She was then a teacher at another elementary school. And a mother of a daughter my daughter’s age. And pregnant with her and her partner’s second child, just as my beloved was pregnant with our second. We would cross paths at various places, like the Family Garden at Pride, and insist we should get our families together. Once, we mustered a playdate, our two sons together and her partner and me. And we continue to keep each other invited to various larger group functions.  But the busyness and fullness of our lives had proven just challenging enough to foil First Contact, that key, direct, family-to-family bond at one or another’s place.

So I was especially pleased that she could come to our home last night.  Her partner, a musician, was up gigging in Napa Valley for the weekend, so she was solo with the kids. We hugged again big and long, and I grabbed the opportunity to enlist my daughter as tour guide to her and her brother’s world in the upstairs of our house, consisting of an art space and a play space and their shared bedroom.  Never did we have enough uninterrupted time for me to elaborate on my magic show message to our principal/ my friend, which was simply: lean on me. Call on me, when you call on parents.  For what I didn’t know. For come what may.  None of us has done this before.

Soon, we were all crowded cheek by jowl in my brother-in-law’s house, peering at our typo-strewn “Xmas Carol” sheets, circa 1978.  My in-laws have been throwing caroling parties with these very lyrics sheets for over twenty years, the copy hammered out by my mother-in-law on some manual typewriter long before White-Out was invented.  We have so much more fun lampooning the typos and singing the lyrics as typed (e.g., “Angefs we have hard on high,” etc.) that no one wants to produce a fresh lyric sheet.  Also it was quite a lot of work: six pages, two columns each, of Angefs and Bethlehums and whatnot.  Nothing to sneeze at.

From time to time I would look up and take in the room, thirty or forty people, singing songs of joy and peace together, a dozen children, by the naturalness of design, seated on the rug at the epicenter of the semi-circles around the piano (the tweens upstairs, Not Being Bothered).  This is what those twenty children and those six school teachers and administrators fully expected to have been doing with their families and neighbors, not a week ago.  There is no reconciling this living room scene with those in Newtown, CT this same night.  Chance and caprice separate us.

But compassion is a thread that ties us to one another, and every knowing, wordless acknowledgement in the faces of the parents and teachers at the magic show and the caroling party showed how widespread and shared the shock.   What to do, helpless as we are to really, truly, absolutely protect our children?  Last night we tried one thing: sing together.