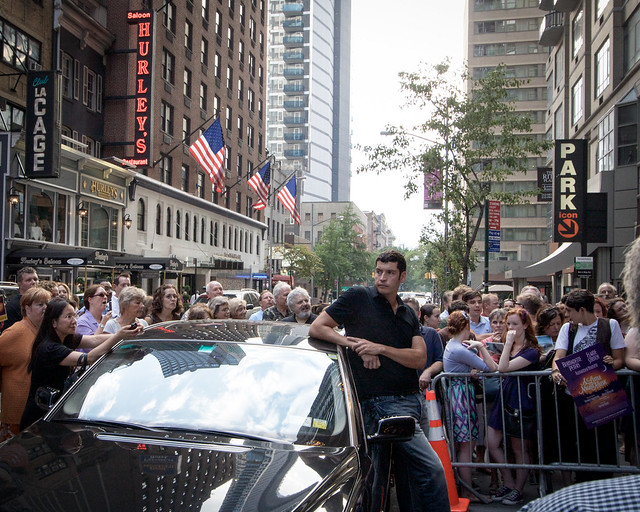 The close observer will note that one of the stage door fans’ poster reads “A Little Night Music.” I had just seen this musical inside with none other than Elisa Camahort Page, BlogHer co-founder, who had casually offered on Twitter that she was going, and did anyone else want to go, and I went, well heck yes I want to go, that’s Bernadette Peters and Elaine Stritch in one of Sondheim’s greatest pieces! Mrs Dad will seethe in jealousy, but still! Count me in!

It was a wonderful time; Elisa was a warm, witty, exceptionally astute theater companion, as anyone who has even a passing knowledge of her might imagine. All was going well until Miss Peters launched into the  first few notes of “Send in the Clowns,” only the best-loved of Sondheim’s songs, rendered by its most definitive interpreter.  God decided to punish me there and then for all my sins, because I was struck with a coughing fit of epic proportions which lingered, and lingered, and lingered, ringing out in that small theater almost as loudly and clearly as Bernadette Peters’ voice.  Bar after bar after bar.  Eight to ten pairs of knees and almost no walking room separated me from the aisle and the exile which I so dearly wanted.  And so it dragged on.

The two elderly theater goers to my left had, I felt sure, had taken months to squirrel away the wherewithal for the matinee ticket, and if either of them had a hat pin handy, would have thought nothing of skewering me on the spot. Their looks did nearly as much damage, but of course failed to extinguish the cough.

Only when the last notes of the song were dying down did my cough do the same. Uncanny.

I apologized to Elisa both sotto voce and profusely, or as much as I could under the circumstances without making matters yet worse.  After the show, we cheerily parted ways, she to her dinner date and I to mine (a guided tour of Brooklyn by none other than Sinclair Sexsmith and her honey, thankyouverymuch).  But over and over again on my way home I thought back to the show and that accursed, never-ending four minutes in the Walter Kerr Theater and wondered: in her heart of hearts, would Elisa ever be able to forgive me for the catarrh that ate 48th St. (and the signature Peters-Sondheim ballad)?