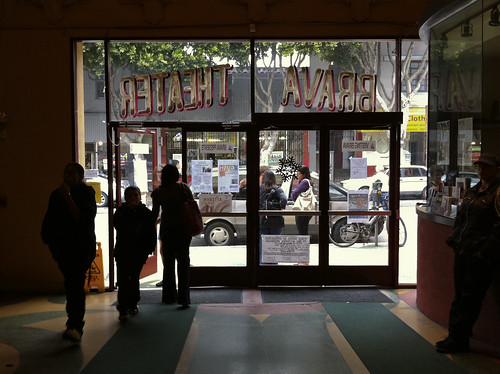 Today we went Â to see The Dance Brigade’s Revolutionary Nutcracker Sweetie at Brava! for Women and the Arts‘ theater in the city. With Clara cast as an undocumented worker, Drosselmeyer as a pink Mowhawk-topped gay revolutionary, a homeless Sugar Plum Fairy, and a Snow Queen lamenting the melting of the Polar ice caps, it’sÂ not your mother’s Nutcracker. Unless, as is the case with my beloved, your mother is a radical lesbian playwright, in which case, it is precisely your mother’s Nutcracker.

As we entered the lobby, my beloved looked around, smiled broadly Â — like Br’er Rabbit might have upon landing in the Briar Patch — and said to me, “This place is filled with lesbians.” She was completely at home. This moment — anticipating adventuresome left-wing theater, in an artistically ramshackle lobby stuffed cheek by jowl with lesbians, all in an ethnically rich, if also somewhat dodgy around the edges neighborhood — this was precisely what she grew up on, and in.

One Minneapolis night in the late 1970s, when my beloved was a mere lass of nine, members of her mother’s feminist theater collective were huddled in her family’s living room, knocking back Margaritas and puzzling over the hole left in their cast by a comrade recently felled by mononucleosis. “Who could possibly replace her on such short notice?” “What are we going to do?” “The show’s opening in a week!”

At which point I picture my gal, absently making her way down the staircase, en route to the kitchen and a glass of milk. Maybe she paused to ask for help with a book report, or a shoebox diorama of Mesopotamia. Then I picture them all wheeling around and staring at her, lightbulbs flickering on first over one head, then another, then another.

She was recruited on the spot. Â Her Ma feverishly re-wrote the part to fit, well, a fourth grader. She spent the next week “out sick” from school, learning her lines by day and running through rehearsals at the theater by night. Friday night at 8 o’clock sharp the house lights dimmed, the spotlight came up on her, and she held her own on the stage she’d been watching for as many years as she could remember. She never looked back.

For the short time that we’re here, we are here together