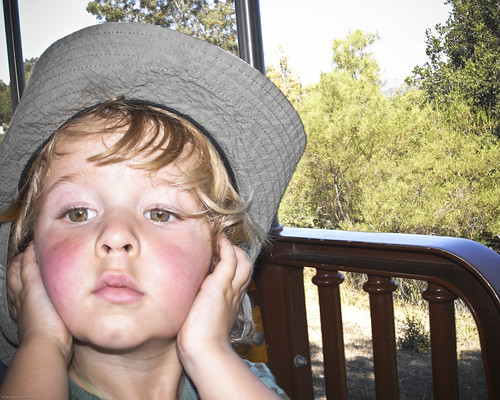 What you see above Â is a boy having a blast on a zoo train. Â It’s just a blast with coping mechanism in place.

Some weeks back, his Gramma took him on a trip to the local park’s steam train (the Redwood Valley Railway, much beloved by generations of Bay Area miniature railroad enthusiasts: all aboard!), and they had the misfortune of sitting a bit too close to the engine and its noisy whistle (how’re ya gonna know?). The first big blast sent the little guy into a dither that evidently took minutes of fun twists and turns to diminish. Â Thereafter, a great many of his statements involved the words “loud noise” combined with the words “steam train.” Also, questions abounded: “Do you like loud noises?” and “Do you like loud steam trains?”

But he seems to have worked through the experience, his train love emerging undiminished. We visited the Oakland Zoo last week, and after a Baba-enforced tour of dromedaries,Â elands,Â giraffes, meercats, tigers, tortoises, and sundry small birds (“no elephants! poop too smelly!”) we paid a visit to the rides, which, it must be said, are pretty much the big draw these days. At least for the youngest among us. We visited the mini-car ride and the merry-go-’round, both of which were delightful in their own way, but essentially warm-ups for our raison d’etre there: the zoo train.

Like he did at the beginning of the merry-go-round, he positioned his hands over his ears. Except this time Â he kept ’em there for the whole 7-10 minute ride. Â All along smiling sweetly, gazing across various vistas near and far. Â He just now looked at this picture and I asked him what he was thinking of in that moment. “The choo-choo sound!” Â Was he enjoying himself? “Oh yeah, oh yeah, oh yeah, oh yeah!”

One more lesson for Baba’s Who Is This Sweet Person That’s My Boy? file.

After the music class