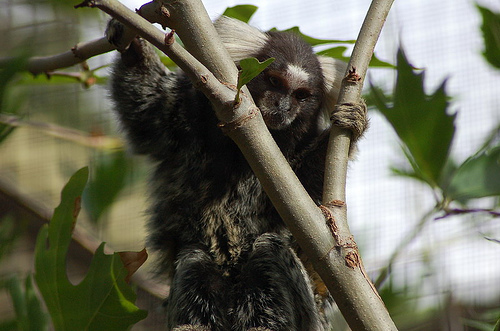 Katherine Ellison, exceedingly intelligent author of The Mommy Brain, keeps a blog, which I’ve begun to peruse lately, since I’ve discovered we’ll be reading together at an event in another week or so (yipes!). She recently highlighted a piece in The Economist, which itself was discussing a study published in Nature Neuroscience. The study, conducted by Dr. Elizabeth Gould, found the cognitively beneficial impact of touchy-feely fatherhood on marmoset dads. Seems fatherhood, for the little monkeys, increases the nerve connections in the region of the brain that controls goal-driven behavior. Which of course leads to irresistable speculation about the applicability of this finding to homo sapiens:

Marmoset fathers…are a model of paternal devotion. They carry their babies for more than half the time during the offspring’s first three months, passing them to the mother only when the babies need to be fed…

…What does this mean for human fathers? It is hard to tell. The attention of marmoset fathers makes them an extreme example of fatherhood. Human fathers do not usually get involved to anything like the same extent. That said, the scientists looked at the marmoset’s prefrontal cortex because earlier studies had shown that activity in the prefrontal cortex of human parentsâ€”male and female alikeâ€”increases when they see their own offspring.

See, I knew something was fishy with my prefrontal cortex lately.

Having a wonderful time…