We’ve spent the better part of a week up in the woods at a very generously loaned cabin in the Sierra Nevada foothills, and in a brilliant display of irony, on the last night here, the WiFi kicks in.  It’s been a fascinating learning experience: because Mrs. Dad and I had anticipated working nights when we were here, and because cell and internet access have been spotty but not consistently inaccessible, its elusiveness held our attention.  Here we are attempting to remedy the “nature deficit disorder” * rampant among us all, big and little, and we wind up in a background wrestling match with internet connectivity.

We were like those sad-sack pigeons (were they pigeons? some sad bird) in that experiment (did B.F. Skinner do this? some craven behavioralist). First, birds were rewarded with a food pellet for pecking a button. All went well; before long they figured out that when they were hungry, a simple peck on the button would deliver the goods. Next, the pellets were consistently withheld. At first the birds pecked and pecked, to no avail. But eventually they figured out the pellets weren’t forthcoming, so they gave up. Meh. But in the third iteration, the pellets were delivered at utterly randomized and inconsistent intervals, whether the bird pecked at a button or not. Sometimes the peck worked, sometimes not. I’ll spare you the gruesome details. But suffice to say, the pigeons went berserk.

Watching the kids rummage around our backyard this past Sunday as they tracked down a few dozen plastic candy-filled easter eggs put me to mind of my daughter’s insatiable and scientific curiosity, as witnessed in her science notebook.

Below are notations made by her sometime last year, ’round about two months after Easter. I think they speak quite well for themselves. 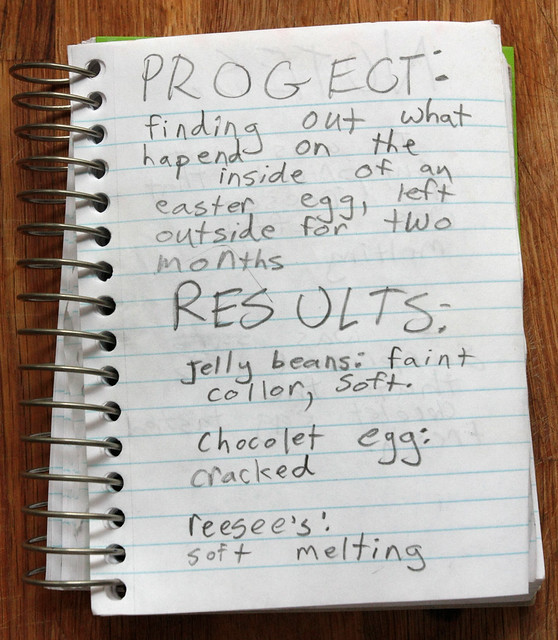 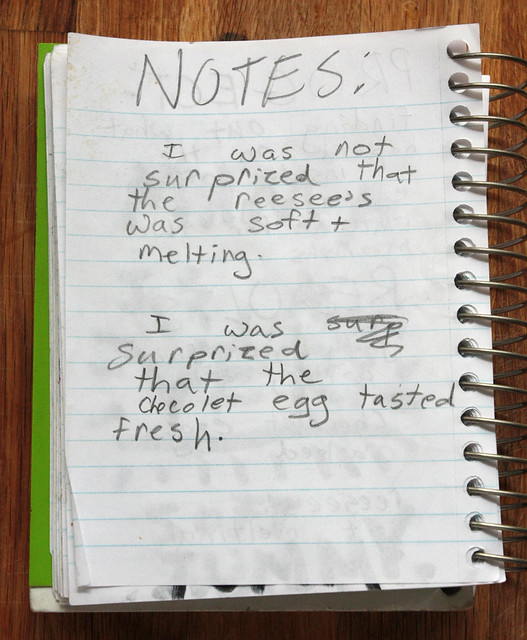 This year they found all but one egg. I quiver in anticipation.