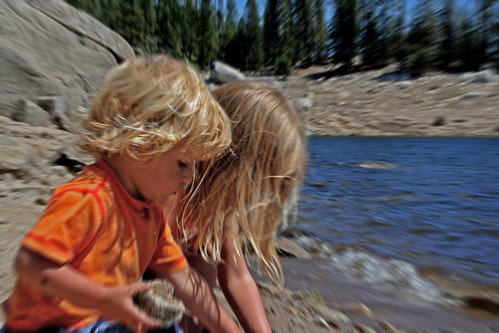 I don’t come to my sister’s cabin nearly as often as I could. Â Not nearly as often as I should. Â It’s beautiful; it’s above 5,000 feet elevation; it abuts a state park and is just a few miles from a beautiful national forest. Â She has always extended me and mine an open invitation. Â Conifers hundreds of feet tall surround it. Â She has spent many of the past eight or so years sprucing it up, so that it reflects her family’s dual Norwegian-American heritage. Â The problem is that it reflects her family for me, too, or rather one young member of it who’s no longer here.

After Erik died, it was nine months until I visited their cabin again. Â We were up in the area for the winter holidays with the beloved’s family at another cabin; my sister was away, and I had come to borrow some stray kitchen implement. Â When I entered the place, my heart was so heavy I could hardly breathe. Â I saw him everywhere: at the kitchen counter, helping mix pancakes with my sister and me; on the couch, highlighting the beloved’s mezzo-soprano parts, with her direction, in her copy of Der Rosenkavalier. Â I saw him intent on a video game, or constructing an elaborate Lego space station. Â With his younger brother, he was playing with my eccentric Christmas (or Jule) gifts to them: funky, home-made “spy kits,” consisting of high-powered magnets and Â mini-flashlights attached to retractable key chains. Outside, he was crouched behind a snow bank, fumbling excitedly for snowballs.

I gathered the pots and pans we needed, and stayed away for a long time after that. Even after my sister began to come.

Read moreAnd now we are four