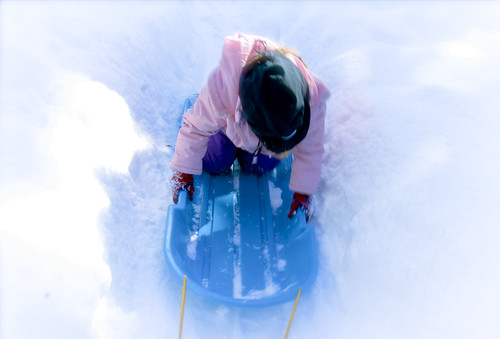 Out with the old! And not a moment too soon!

[Broke sidebar update: sidebar still broke just fixed on the home page! As continues to be abundantly evident.  Not in abundance: my bright ideas as to what happened, or what else to try to un-happen it.  But I’m back home now, and less able to make excuses.  Fixed! New Year’s resolution #1?  Fewer excuses!  New Year’s resolution #2: add a slash-div dealie bop at the end of a suspect post, just for good measure!]

The beloved children’s classic The Velveteen Rabbit was made into an equally beloved holiday dance piece twenty-two years ago by ODC/Dance, one of our finest local dance companies. A week or so ago, I went to see it with the girlie, and the trips there and back were nearly as eventful as the show.

For all the time I spend caring for the little munchkins, it’s been rare that she and I have gone on a special Baba-daughter outing. Her craving for Mama is great, and perhaps would be so regardless of the fact that Mama works outside the house more hours than Baba does. So the arrangements we usually make for solo time with the kids tend to accommodate the lil’ monkey’s ever-unslaked Mama-thirst. This time around, though, the LGBT family-friendly performance was smack dab in the middle of Mama’s prime-time work hours. Grampy gladly watched the boy, and my girlie and I skipped footloose into the city to see what kind of fun we might have together.

Before we even make it the few blocks to the subway, I can tell by her mood that she is loving this every bit as much as I was. Singing, prancing, the outsize imagination vibrating and sizzling and shooting off in all directions. Since the beloved’s production of Fiddler is fading slowly into memory, I am less frequently conscripted into the role of Tevye (to her Tzeitel). The next theater production, Les Miserables, is months away, and the seasonal fave Amahl and the Night Visitors hasn’t yet encroached, so what’s filling the lil’ monkey’s mind has been the characters in our current reading: L. Frank Baum’s Oz series. We plowed through The Wonderful Wizard of, just polished off The Land of and are launching into the third, Ozma of, with reckless abandon (bringing her chapter book total — Alice and Pipi and Mary Poppins are also in her wake — way above that of the number of books Baba has read this year). Today, I am the Tin Woodman. 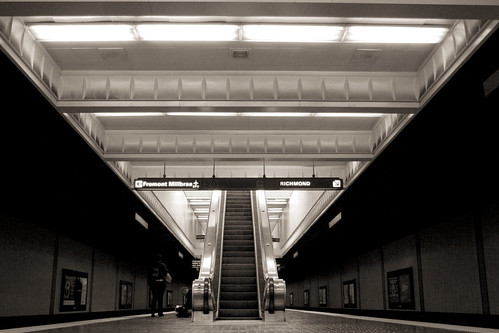 This was a moment during which the lil’ monkey and I were waiting for the BART train into the city to go see a holiday dance show.  For minutes on end we watched people descend the escalator: first shoes, then legs, then torso, then whole person.  Could have stayed like that for hours, except the weekend trains run on a 20-minute cycle.

An account of our little journey is currently in production.  Unfortunately, it was bumped out of the queue mid-week, due to the fact that my limited discretionary hours were hogged up by my sitting on the couch doing deep breathing exercises, working yet again through the rage/despair/cynicism/fatigue cycles.  Because my Prez-elect, he whom I really wanted to think the best of, just gave both a microphone and a position of symbolic prominence to someone who helped see to it that the daughter I took to the holiday dance show last weekend would live in a family that, as of November 5th, had considerably less legal and financial security than it had November 3rd.  Based on: naked bigotry.  Or rather bigotry in sheep’s clothing.  Warren either speaks for, or represents millions more like him.

All kinds of pundits have noted that such a move was tactical, predictable.  A drop in the copious bucket of good this man and his administration will bring.  Yeah, whatever.  I long ago misplaced the ability not to take all this personally.  Long ago lost the thickness my skin once had.  I can pinpoint the moment, too: it was the September dawn, bathed in a hospital’s fluorescent light, when my daughter drew her first breath, a little over four years ago.

First off,  I really wanted to get back to sweet little stories of human connection and the everyday foibles of parenthood, you know?  Really did.  Have something in the hopper even.  I genuinely try to use this venue as a means to lift not just my own spirits, but those of others.  But then the shite keeps being shoveled directly into the fan, and me and my family are positioned directly in front of the damn fan.

And here I thought that my four-year-old’s tantrum en route to preschool was the toughest thing about being a lesbian parent.

Steven Waldman: Do you think, though, that they are equivalent to having gays getting married?

… Most people, you know… I have many gay friends, I’ve eaten dinner in gay homes, no church has probably done more for people with AIDS than Saddleback Church. Kay and I have given millions of dollars out of “A Purpose-Driven Life” helping people who got AIDS through gay relationships. So they can’t accuse me of homophobia. I just don’t beleive in the re-definition of marriage.

Incestuous intermarriage, polygamy, pedophilia, and our family, likened by the inaugural invocator.  Yup.  Puts the pre-preschool tantrum into perspective.  Or rather, weighs that mirco burden down with a helluva lot of macro shite.