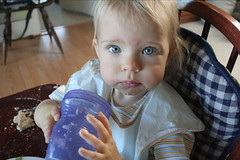 Long pause since the last entry. It has been a heck of a year. We are in the cusp between Erik’s birthday (he would have been 11 on Monday) and the first anniversary of his – of his going to the great beyond.

Very hard to use the word death in reference to a child.

Meanwhile, the wee bairn evolves, with no particular concern, as of yet, about her future. A wonderful thing. We are all grateful for the here and now. 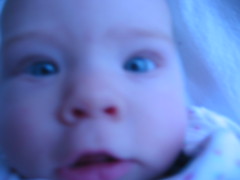 She’s filled with marvel, and so, therefore, am I. Everyone follows other people’s eyes, when they’re looking at something with great intent. Especially if it’s something we’re not aware of (oh, like an object up in the sky, or on the ground, anywhere). We see the person looking, see that they’re riveted, and we can’t help but want to know what’s riveting them. Maybe it’ll rivet us, too? So we look. Anew.

In less than a month, the wee bairn–she what has made a Baba out of me–will be out of the womb as long as she’s been in of it. During the past year our world has transformed. Much of this can be attributed to fresh parent hyperbole, but there’s more to it: the brightness of her emerging life has been flanked by two very heavy losses. During the last trimester of her gestation and her first nine months on the outside, my nine-year-old nephew Erik was diagnosed with, fought tooth and nail against, and ultimately lost his battle against spinal cord cancer. And on the morning of our newborn’s six-week birthday, a very dear friend of ours–K., a would-be butch mom herself–died in an accident.

Before our daughter was born in September 2004, I had intended to launch a Baba log–otherwise known as a blog–to publicly explore lesbian fatherhood: mine in particular, but the notion/experience in general as well. In June I had been working on the beginnings of a book project. After dozens of conversations with lesbo parents in San Francisco over Pride weekend, I had learned that a network of gals like me (whether we called ourselves butch moms or lesbian dads or anything in between) would have a lot to share with one another. So that Sunday night following Pride, I snagged a domain name (lesbiandad.com) and drafted a web page that might serve as a meeting/chatting spot. Then I received my brother-in-law’s call from the hospital about Erik, and all my remaining discretionary time (not dedicated to my partner’s pregnancy, and later, her recovery and our daughter’s new life) was redirected to the fight for Erik’s life.

Tonight, it is seven weeks since he died, and his presence is enormous in my heart. And nearly seven months after K. died, her partner, my dearest, oldest friend, is now slowly trying to resume their efforts to become parents, only now on her own, as a widowed mom. I feel as a daily presence the unlived futures of K., as a parent, and Erik, as a boy and later a man. That cannot help but shape my parenthood, and for this I can only be humbled, and grateful.

Slowly, I am paddling back upstream, back these past nine months, recovering the ballast I had heaved overboard. Opening up this venue (at long last, and now with the intercession of WordPress) is an important part of that recovery process.

While I will contribute here regularly, I would like the LesbianDad blog to function as a place for a community of gals to plumb, mull, share, and extoll their lives as lesbian parents (whatever their ilk). I hope that together we may help support our parenthoods as much as possible–and in so doing, help our kids live even fuller lives. For their sakes, for ours. For K.’s sake, and for Erik’s.