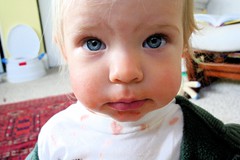 Oh sure, she used the potty daily after it first arrived. I mean, she asked for it, by name.

The thrill wore off 72 hrs later. Now it’s a waiting game. It’s The Treasure of Sierra Madre, and we’re all sitting around the campfire, watching who’ll nod off first.

She doesn’t know how tough we are, though. We waited years for her. We can wait years for her– her– for her product to go directly where we’d like it to go.

Meanwhile I am starting to tally the parental dilemmas whose solutions boil down to: patience. And if patience isn’t the answer to more than 90% of those dilemmas, I will eat my copious collection of dirt- and sweat-stained baseball caps, one by one. 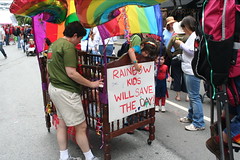 So the first, I’m sure henceforth annual, Blogging for LGBT Families Day seems to have been a rollicking success. As of Friday morning, June 2, 120 blogs sent a shout out about queer parenthood. [Update as of June 8: 133.] Reading the entries (cataloged here by Dana Rudolph of Mombian, our she-ro hostess with the mostess) has been like–hmm–like sinking my chops into a juicy, foil-wrapped, plastic basket-bedded Mission District burrito after a long sojourn away from the California homeland. Would that be it? Or like dropping into a hot tub (or a Hot Tub; whichever) after a 12 hour-long moving day. Or like, well, like reading all about other queer parents’ experiences, here in the rosy dawn of my (de facto queer-o) parenthood, and at a moment of enormous national growing pains over the struggle for lgbt civil and human rights.

I’m still working my way through the many entries, but the early report here is that I loved Diary of a Lesbian Step-Mother’s retro-blog of her piece, “Girls Can’t Marry Girls” Here’s a taste:

At breakfast through the lethargic language of spelling we debated our options. “Should we C-O-N-F-R-O-N-T his P-A-R-E-N-T-S and ask them why they told him that girls can’t M-A-R-R-Y other G-I-R-L-S?” It’s like speaking in code in front of an NSA agent, though, because she is prematurely learning to spell, or at least learning to piece together some meaning from the pronounced words among the spelled-out ones in the way that one can step back and tell what the puzzle will look like long before it is finished. “WHOSE PARENTS???” She asked. Soon we’ll be learning Bulgarian or some other obscure Slavic language just to be able to discuss sensitive matters in her presence as I suspect Pig Latin is already neatly under her belt.

Our own little monkey is still under two years old, but I am certain the hour is fast approaching that we won’t be able to spell K-A-K-A safely. At least not without hearing her titter afterwards.

The image above is of the selfsame crib-on-wheels I mentioned in yesterday’s entry. From the step-off at Spear Street and all along the first half of the parade we kept catching up with it and then getting passed by it, like how you keep gaining on and getting passed by a bus, when you’re cycling down a city street. Only eventually one of the wheels finally gave way–no, no injuries; the kids were skipping along the street outside the crib by then. When the crib was finally steered off the street and onto the sidewalk, umpteen blocks into the parade, we who’d been watching its progress cheered it heartily, for the limping but inspirational thoroughbred it was.

This is a test of the photographer’s WiFi transf

I know that I will be infinitely grateful when it