Mama’s opening a show tonight, and what that means is that the household has not seen her all week. Only slightly exaggerating. Â Those familiar with the ways of the theater will know that tech week is like a collegiate final exams Hell Week, times a million. Â Certainly with more drama.

By now, those of us left abandoned by tech week approach it with a game, can-do attitude. For me this translates into: anything goes. Will it help pass the time? Good, we’re doing it! Might it take their mind off the vaguely un-plugged feeling that’s haunting them? Alrighty then!

END_OF_DOCUMENT_TOKEN_TO_BE_REPLACED

By LD on July 13, 2010 in Moving pictures, On marriage and commitment, Re: the lil' peanut

And by carousel ride, I’m not referring lyrically to the online comment stream debates elsewhere (I’m thinking of those at Autostraddle and AfterEllen) between women who have seen the lesbian family film The Kids Are All Right, which opened in limited release this past weekend and is opening in wider release this Friday (theaters here), and those who haven’t.  And won’t.

Though I am thinking of them.

An impressive and spirited number of those who haven’t seen the film are cocksure (d’oh!) they know precisely what it’s about and what cultural impact it will have, and are therefore both avoiding it like the plague and denouncing its writer-director. (“No cash for this trash!” one commenter declared; “Lisa Cholodenko is an idiot!” concluded another.)

To which I can only sigh and moan: My people, my people. That, and periodically jump on one of the up-and-down ostriches and try to talk sense into the cantankerous menagerie.

END_OF_DOCUMENT_TOKEN_TO_BE_REPLACED 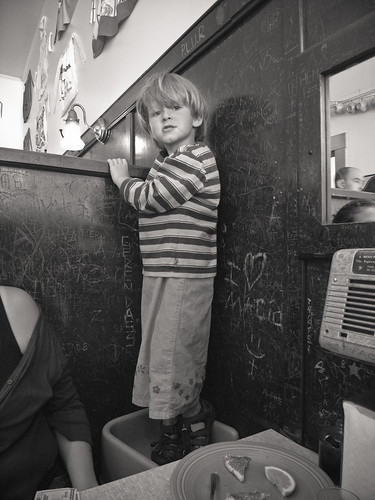 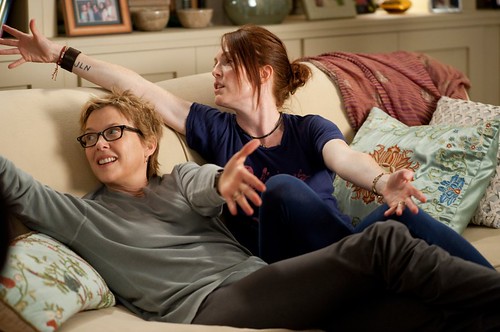 Annette Bening and Julianne Moore in a scene from Lisa Choldenko’s The Kids Are All Right. Photo credit: Suzanne Tenner.

I am proud to say that I was a hard sell for The Kids Are All Right, the family comedy-drama starring Annette Bening and Julianne Moore and opening in limited release on July 9th.  A mainstream film featuring a lesbian-headed family?! And the leads are among two of the finest actors working right now? With seven Oscar nominations between ’em? Oh you betcha I’m there.  But I’m there with both expectations and hackles raised.  The attitude I bring to the movie theater approximates what you might bring to the living room in which your daughter’s prom date sits. Hopefully nervously.

Picture your kid, a sweet tender thing you’ve dedicated the last decade and a half to protecting and promoting, who deserves the best, or at least a fair shake, goddamn it.  And then there’s the date, a Usual Suspect with a history of stringing folks along and then breaking their hearts, or worse.  The sweet tender thing in this construction, though, is me and my people: lesbians, even more specifically, lesbian-headed families, and the kids in them. The prom date I’m looking askance at? Commercial Hollywood film.

I have a right to be squinty-eyed.  For most of my movie-going life, commercial Hollywood film has left me and mine either ignored along the walls surrounding the dance floor, quietly convincing ourselves of our worth despite the lack of  attention, or attended to for just a moment, only to be betrayed in the next, accidentally or even maliciously.

I will never forget sitting, or rather eventually slinking down lower and lower in my seat, in a suburban Minneapolis movie theater watching Basic Instinct in the early 1990s.  A mainstream Hollywood movie that had a lesbian in it! Plus a bisexual woman!  I had to go, and took with me my gal sweetie, a friend, and her gal sweetie.  The overwhelmingly heterosexual crowd watched placidly as blood splattered the screen in the opening scene, and then–I’m not making this up–later groaned and called out in disgust when Sharon Stone kisses her female lover.  For Michael Douglass’ benefit.  Which lover, to no one’s surprise, turns out to be a homicidal, suicidal, man-hating basket case.