Slide show of images in and around San Francisco, the afternoon following the CA Supreme Court’s decision to uphold Prop 8 (though also uphold the June-Nov marriages). 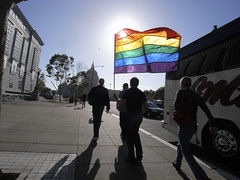 As of the wee, wee hours of Wednesday morning, I gave up waiting for all my photos to load to Flickr, where I stash them all. Â I put in the image at left as a placeholder, and then in the more civil hours of the morning, posted the aboveÂ slide show of images from some of San Francisco’s reaction to the California Supreme Court’s decision upholding Prop 8.

It’s a companion slide show to yesterday’s morning scenes; they’re mostly of the afternoon/evening rally at City Hall, the march from there to the rally at Yerba Buena Gardens, and then a trickle afterward.

Plenty happened during the afternoon that I didn’t witness — for one, I went to City Hall to listen to the press conference, and wasn’t a part of (or witness to) the civil disobedience that folks did. Over the course of the day, 175 people were arrested (though all the public assembly I saw was shockingly civil). I also took a break in the afternoon to upload the morning pictures.

As with the AM slide show I posted earlier on Tuesday, I’ve captioned the images and provided some minor commentary here and there, which you see if you click through and view the set picture-by-picture at Flickr..Â

[Ed note: Want to see another Â huge set of photos of they day? Â Steve Rhodes has 392 great ones here.]