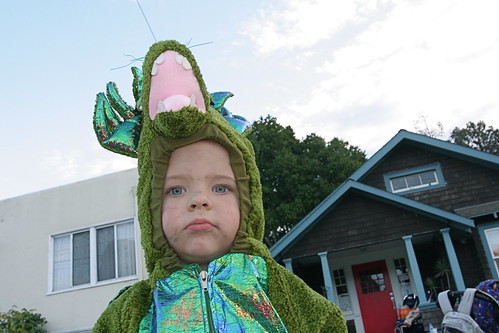 This archival pic’s from last fall’s Halloween Block Party. She’s chilling, you know, in between terrorizing people with her fierce dragon breath or what have you. Slightly (but not that much) more revealing angle of fierce dragon action here. O, what I could do with a costume like that, in the right venue.

Reminds me of the giant winged eggplant, the mascot of a Minneapolis vegetarian collective, the late, great New Riverside Cafe. It went to May Day parades and fairs and such, but it also made cameos at things like Phyllis Schlafly’s speaking gig at a nearby college. There was nothing us feisty Lesbian Avengers could do to disrupt the proceedings any more than that winged, 7-foot tall eggplant did, just sitting there. God love it.

Now don’t get me started on my brush with lesbian celebrity I had at that cafe one time in the mid-1990s. Otherwise it would begin to smack of a post, and all this text is in that light colored font, just to remind me that I’m not actually writing a post, but a modest caption. But remind me sometime. I will let on that it includes none other than k.d. lang, and a corn cob. Umm hum, yup.