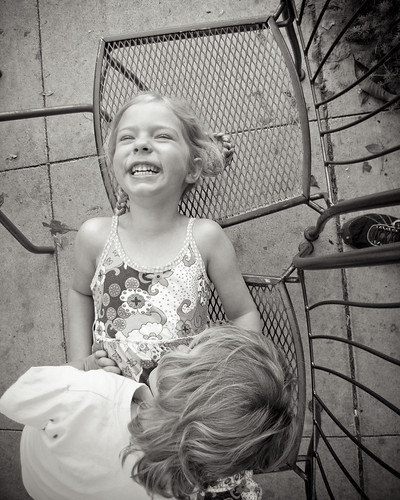 Photo above Taken by ye olde Special Uncle (note shoe at 3 o’clock) during a delightful chance encounter with him and ye olde Special Aunt outside one of our town’s most venerable coffee emporiums. Emporia. Whatever.

We’re outside the flagship Peet’s, opened by Alfred Peet over 40 years ago. Â He was rightly known as the “grandfather of specialty coffee,” being the first in these parts to dark-roast small batches of fine, hand-selected beans. Â Caffeination in Berkeley (and eventually, the nation — three of his protÃ©gÃ©s went on to found Starbuck’s) would never be the same.

Peet’s will always be second to Cafe Med, though, where Ginsberg wrote “Howl,” where a scene fromÂ The Graduate was shot and, perhaps most notably, where European espresso coffee was first introduced to not just to the East Bay but pert’ near the West Coast. By genuine, Italian and Italian-trained baristas working the largest espresso machine in North America.

In the late 1950s the Italian barista chaps bought the place from its original owner (a woman who’d begun this cafÃ© after starting its sister cafÃ© in San Francisco — Il Piccolo — which was to become the still-legendary CafÃ© Trieste). Â They began to moderate the strong-tasting espresso with added steamed milk to suit the American palate. Â After Lino Meiorin (one of the genuine Italian chaps) kept saying, “more latte” he finally just invented a drink to keep on the menu. Thus was born the latte. Â Hey, I read it online in more than two places, soÂ it’s gotta be true.

No lattes for the kiddles this afternoon, though. Instead, a fresh organical smoothie from the collective around the corner. Thanks to the fiver lent by the Auntie & Uncle. Ah, small town livin’.