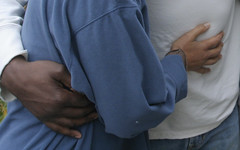 [The concluding post, limping along a few days after the close of the Freedom to Marry Week blog carnival, What About Love.  Thanks, Robin.]

The whole marriage equality fight can be viewed from so many angles and through so many lenses that a person could get dizzy looking at it. A kaleidoscope of issues keep shuffling and reshuffling: the long battle for gay peoples’ civic and human rights. The use of marriage — by both church and state — as a means to sort and promote not just preferred relationships, but preferred people. The fight, older than our republic, to keep the church and the state separate. The tension in US politics between constitutional and direct democracies — or, if you prefer, between the protection of the minority and the tyranny of the majority.

The fight played out in California this past year in such a way as to split the issues into millions of more shards.  Some thirteen and a half million, to be exact, if you are willing to consider each voter to be unique.  A little over seven million fell to one side of the vote, nearly six and a half million to the other.  These millions could be split and re-split into over half a dozen opposing groups, membership in any one of which could be predictive of one’s vote.  Older vs. younger. Regular church-going vs. not so church-going. Evangelical Protestant, Roman Catholic, and Mormon vs. everyone else.  Coastal vs. inland.  Northern vs. Southern. Highly educated vs. less so.

On the one hand were folks who had actually met or known the people whose civil rights they were voting to support or revoke.  And on the other were folks who never met any of us face-to-face, never really knew us, but were willing to believe lies about us just because.  Because the lies were familiar, and helped somehow reinforce a sense of purpose.  Because to search out the truth would entail breaking away from community orthodoxy. Because change is hard, period, even when there’s a little voice inside that whispers that it’s right.  Neighbors, family members, co-workers all fought one another — or if they didn’t fight outright, then they suspected one another, mistrusted one another in ways not seen in these parts since who knows when.  Since the Gold Rush?