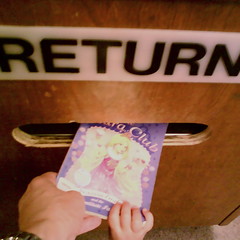 [Trotting just a smidge behind schedule, here’s the third in a series for Robin Reagler’s Freedom to Marry Week blog carnival, What About Love]

After Proposition 8 rescinded our right to marry, and the California Supreme court agreed to hear the lawsuit to invalidate it, we 18,000+ legally married same-sex couples entered a juridical no-woman’s land.Â It’s been limbo or purgatory, depending on your point of view.

The court’s decision-making timeline is such that, in the worst case scenario (not only is Proposition 8 upheld, but we freshly married old couples are retroactively divorced) our marriage will have been on loan from the state for less than a year.Â Â Time enough for one state income tax filing with the box “married” checked off.Â Time enough for us to scratch our heads, bemusedly, and answer “Yes” a few times, when given the option to choose marital status.

Borrowed: the luxury to withhold civil rights from fellow citizens based on their identity, and squander millions of dollars and dozens of years over it all in the process.