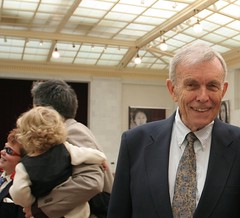 [First in a series for Robin Reagler’s Freedom to Marry Week blog carnival, Some/thing oops! What About Love]

You want old? Old was what my dad was when, over a dozen years after we’d held a weepy-exuberant commitment ceremony in a botanical garden across the bay, my beloved and I were legally married in City Hall in San Francisco. Like, he was four score and seven years old, that’s how old. Â (I can’t tell you how disappointed he was to turn 88, simply because he could no longer quote Abraham Lincoln when he answered a question about his age.)Â

My dad wasn’t the only old timer in City Hall that summer. Â When we went to get our license back in May, the first week same-sex marriages were legal, most every same-sex couple there was way older than the average marrying age. Sure, there were young pups in relatively fresh love, lining up to get some. But most of us were old dogs, to one degree or another. Â Many of us had kids along for the ride: babes in baby carriers, Â toddlers tumbling underfoot, Â ‘tweens, holding rings and beaming with pride. Â Some kids were probably so grown I didn’t even realize they were the kids of the newlyweds. Â But based on what I saw, both the day we went in to get our license and the day we bum-rushed the rotunda steps to get hitched, the average age of us same-sex “Party As” and “Party Bs” had to be at least a dozen years more than those before — and after — the same-sex nuptials summer of love.

There we were, crow’s feet framing our eyes, salt all in the pepper of our hair. Some with a lot more salt than pepper. Â Our partners’ hands, their voices, their foibles, even their capacities for redemption were all very well known to us. Â Especially their capacities for redemption. Â Else we wouldn’t be there. Â The love stories that summer were not so much ones of love in its first tender, brilliant bloom, but love bloomed, and spent, and budded out again, now with deeper roots and thicker branches.Â

We married eyes wide open. Â So open as to be agog at it all. Â Agog Â walking into City Hall and finding smiling faces absolutely everywhere. Â City employees, hell, random citizens of the city all had elbowed each other out of the way for the opportunity to be part of history — the part where love rose up, if only for a summer. Â We were agog at the youngster hetero couples, traipsing up to the counter with such a relaxed sense of — what’s the word? What’s that thing that seemed so unimaginable, so exotic, so utterly unfamiliar? Â Ah: Entitlement.

That’s the one thing — the only thing — that was new to us.Â

[Here are the other Somethings old at Robin’s carnival.]

[next in this marraige equality series: Some/thing new]