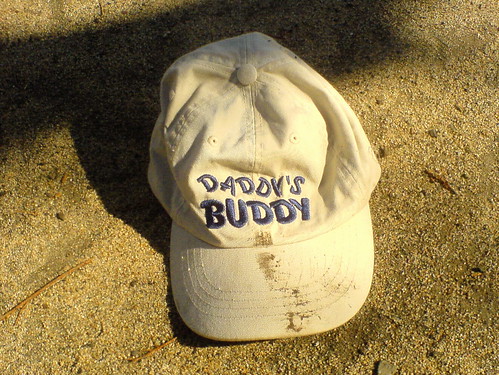 As seen on the tot lot playground.

The other day, at our neighborhood tot lot, a dad was pushing his toddlerish child in the swing next to me and the lil’ monkey, who, per usual, was heading into her second hour in the saddle, showing no signs of fatigue, though her lower extremities must surely have been tingly-numb by then. I know my arm was. She was singing DaDa-ist songs to herself, as she is often wont to do, and my mind (and ears) had occasion to wander to the neighboring swingers. In the (relatively) short time he was next to us, I heard the dad use on his kid the diminutive “buddy” as well as its slightly less frequently employed cognates “pal,” and “my friend.” Now I ask you, to which biological sex of kidling, based on your own experience of the usage of these terms of endearment, do you think these diminutives were directed?

Boy kids are buddies. Girl kids are — well, in my own anecdotal experience, they have been lots of things, but rarely buddies. Oh, don’t even try to offer up as an example Kristy McNichol’s character Buddy in the 1970s TV series “Family.” It only goes to prove the boy-association of the term. Everyone who was a then-tomboy and future-lesbo watching that show back then knows just what I’m saying. Even the rest of y’all know what I’m saying.

I think we can take my anecdotal experience as pretty much on the mark, and then go on to try to puzzle out what that means that we tell boys they’re our “buddies,” and ask what role that selective form of address plays in boys’ socialization as little bouncey rubber toughies. In what I’m sure will be a life-long quest to ensure both our kids have maximum elbow room to become whomever they wish to become, I am compelled to not let these differentiations drift by unexamined, as if they were inevitable, or harmless, or even in objective service to absolute biological truth. Some may well be, and I’ll learn tough lessons about the power of nature over nurture, I’m certain. But the language we use in addressing the wee mites falls in the realm of nurture. So these are hairs I gotta split.

Now as it happens, I’ve returned to work outside the house this week (ha HA! just in time for the sleep deprivation to begin to manifest in hallucinations! “What’s that behind the copier?!! Duck everyone! Duck and cover!! Oh, no. Never mind. Don’t even listen to me. Go on with what you were saying.”). But so where ordinarily I’d be able to humor my desire to obsessively research the larger topic of gender socialization as it plays out in terms of address for girls and boys in early childhood, and maybe season this post with some Learned Wisdom, now I plain can’t squeeze in the time. Circumstances call for me to become a far more efficient quick sketch artist these days, and I’m sure it’s just as well. (Redundant repetitiveness begone! Indulgent loquatiousness, meet the bullet point!) I can note, though, that feminist linguists (and one must say they are cunning) have already made the case for how normative gender-training positively drips off of language, from the very first application of it upon fresh human beings, and all the way down to the smallest particle of speech.

We know language matters, period. And an innocuous diminutive like “buddy” brings with it meanings we are associating with our boys, intentionally or not, when we use the term on them (and not on their sisters). After spreading out some of those meanings for us to look at and cogitate on, I’ll just end with a flurry of questions, since that’s all I can do these days on so little sleep (e.g., “Sweetie? Did you feed the garbage and take out the dog? Or did I? And if I did, why did I?”). Here are some connotations “buddy” holds for me:

â€¢ a buddy is a friend, (and therefore an equal, as opposed to a younger, physically and emotionally dependant being whom we are entrusted to protect);

â€¢ a buddy is rough-and-tumble;

â€¢ “buddy” floats around nearby “buddy boy,” which, though I am hard-pressed to find an etymological tract on it all, definitely feels to me to be the linguistic equivalent of a slightly-too-hard sock in the arm: a good natured, but watch yourself kind of address.

A gloss on the denotative meaning of buddy confirms the above, and points out that it is speculated to have originated as a variant on “brother,” and was “long associated with coal miners.”

So here are some of the things I wonder: Do fathers use this term in reference to their sons more than mothers (generally, if not even stereotypically speaking)? If so, what might it be about a father-son bond that (general, if not stereotypical) men feel that inspires them to insert this good-natured wedge between their parental selves and their boy children? Why would any of us do this? Is it the rip-tide of conventional language use that pulls this word out of the mouths of those of us who don’t intend — consciously, at least — to make our boy children into durable equals? Or do we really want them to grow up faster than their sisters, and tougher? And, more importantly, do they?