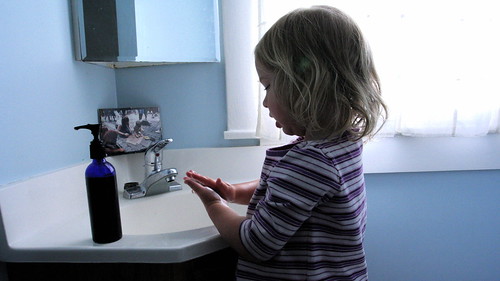 I am into week two of Babarama, my first foray into full-time childcare since we’ve moved from “child” to “children.” I have discovered many many strange and wonderful things, most of which I can’t find the time to tell you about, since the breezy discretional hours of yore (hours?! what am I saying?! minutes!) continue to hide themselves somewhere either under the bed with the dust bunnies, or behind the couch cushins with the lost coins.

Ordinarily, the beloved and I share childcare at a rate of some kind of 50 – 75% each, both of us working a similar amount of time. We are so dadgum committed to this that we’ll get hernias, ulcers, and worse in a dogged attempt to make our working lives conform. Then, at such time as we’ve managed to bend our working lives into this shape (not easy in this man’s world, as I’m sure you know!), we heap yet more hernias and ulcers on as we actually try to to manage to feed and shelter our brood on what’s left of our incomes. Easier dreamt than done. But heaven help us we are determined. Since, we ask ourselves, which lifetime would it be, in which we balance work life and family life? (And who better for the task than two lesbian feminist parents, one has to ask?) I promise I’ll report back as soon as we’ve concluded that we’ve figured it out in this lifetime. It’s entirely likely that the internet will still be used as a means of communication by then.

Meanwhile we do what we can. Which means that occasionally we trade off full-time kiddle care when one or another of us has a bumper crop of work. So it has come to pass that I have been knee-deep in kiddles of late, and have had to postpone my best-laid plans for hefty, essay-length ruminations here (I can’t even count the number of sober, consequential ditties circling the LD airport, but believe me they are legion).

I can grab a moment to mark a major milestone, though, and the lil’ monkey hit one yesterday evening. Our little girl washed her hands completely on her own. Yep, she did.

All of you who try to get their toddlers to wash up their hands before eating know why such an event is newsworthy. It ordinarily takes us a good five minutes every time, the first three and a half of which entail wrangling the boomeranging child back to the sink over and over again. What a boon, then, for the lil’ monkey to have discovered hand washing’s special joys for herself. Only I didn’t quite anticipate that something about the process might capture her imagination, and never let it go.

“I’m washing my hands!” came her little voice from the bathroom.

“Great,” the beloved and I each say, absently, from our dinner prep the kitchen. Of course we figured she was “washing” her hands, rather than actually washing them.

“No, I’m washing my hands, by myself!” Dang! She totally heard the casual disbelief trickling out of our voices. Of course now I had to get up and go see. And what sight do you suppose greeted my eyes? None other than our little girl, hiked up on a stool she had procured, tall enough now to have leaned over and (a) reached the soap dispenser, and (b) turned the sink water on and off. (Global warming notwithstanding, this is California, a state in a six-month annual drought, and so one turns the water off after one initially wets one’s hands. Ditto tooth brushing.) There she was, our little girl, washing her hands all by herself for the first time, complete with a native Californian’s water miserliness. Only she was washing over, and over, and over, and over again. A la Howard Hughes in his later, Kleenex tissue box-for-slippers years.

The tune for “Sunrise, Sunset” welled up behind all the other incessant noise in my head, yet again, as it does for each such growing up milestone. (Cue my favorite harp version of the timeless classic.)

“She did, sweetie! She did wash her hands all by herself!” I call out to my co-conspiritor. The beloved rushes to join me. And there we both gather, teary eyed and arm-in-arm, gazing upon the sight of our little girl, growing up into Howard Hughes before our very eyes.

She turned and saw us, flabberghasted and slack-jawed in the doorway. “Want to see me do it again?” she asked, pride positively radiating from every pore. “Yes, sweetie, yes!” we each say, breathlessly. And so again with the Howard Hughes. Through our sniffles, we sway back and forth, and hum the theme song of parenthood.