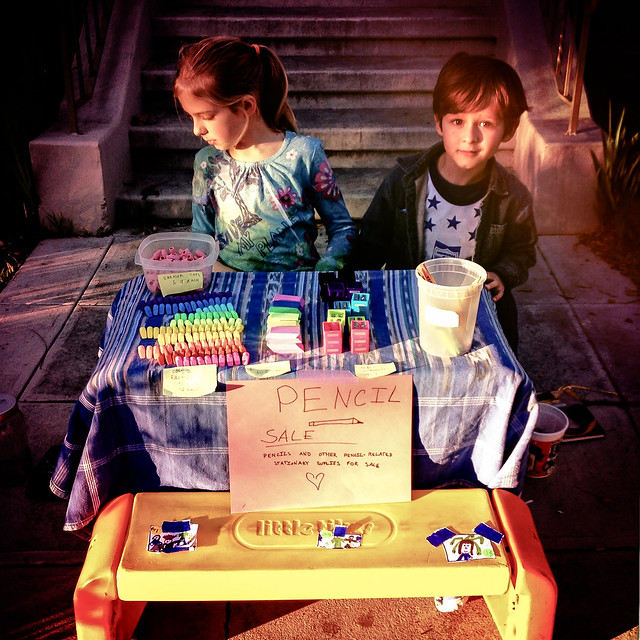 The sign’s small print reads: “PENCILS AND OTHER PENCIL-RELATED STATIONARY SUPPLIES FOR SALE.” Taped on the front bench is some original artwork, for sale at a modest price ($25 per) by the shop assistant at right.

Recently I was talking on the phone to a friend and colleague, while looking out the front window. I told him I may have to jump off abruptly if some untoward person walks by, because my kids were out on the street selling pencils.  And we do get an untoward person or two strolling by pretty much daily, at some point or another. He chortled at what he thought was a quip at our family’s financial straits, at which point I had to say, “No. Really. They’re on the street selling pencils.”

Not that I wouldn’t have appreciated some extra discretionary cash during this challenging but very intriguing, dual-working parent, dual-self-employed and not-a-one-of-us-getting-healthcare-costs-covered-from-our-work period. But long ago, in a fit of parental largesse, I decided the scratch they make from their sidewalk sales is their own.  No no: I’ll not accept congratulations for that, it’s just the way I am.

The pride I felt in her selling stationary supplies, however, was eclipsed by my pride in what she did with the proceeds this past Sunday.  In its emotional fulness, it is her tale to tell, and she’s not sure to whom or when she’ll tell it, but I’ve got leave to say the following: she took this money and bundled it up with the previous two years’ worth of  lemonade sale profits and some sundry allowance money, and then bought $42.50 worth of sandwich-making supplies, made 40 sandwiches, bagged them with a half a bannana and a cookie, and distributed them to 39 homeless folks (one guy wanted 2, one for now and one for later) on the streets of San Francisco’s Tenderloin district, led with love and care by the cofounder of the Faithful Fools, a Tenderloin street ministry.  Behind her every step of the way were Mama and Grandma (who has done theater work with the Fools since around about when they began).

The whole thing? The girlie’s idea. Originally she wanted to bag up all her money and give it directly, as cash, to as many people as possible. But Grandma’s years with the Fools taught her that food, lovingly shared, is way more helpful. So yes: she may appear to the untutored eye to be a wee entrepreneurial capitalist. But this, my friends, is not your mother’s entrepreneurial capitalist.