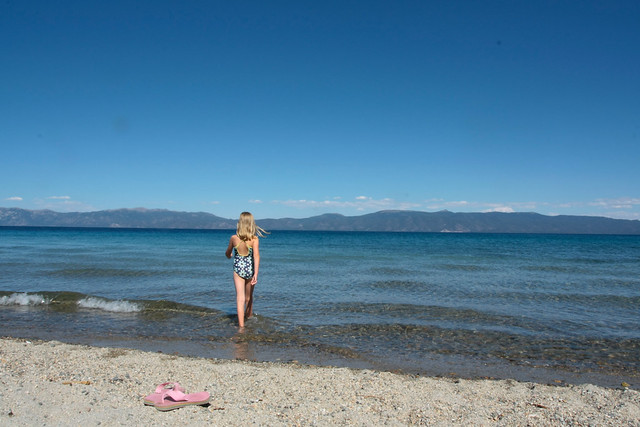 Seven, going on either eight or eighteen (depends on the hour), looking for all the world as if she’s going confidently in the direction of her dreams. When confronted with a body of water, whether tepid or ice-cold, a great many of these dreams are floating just under the surface, as far out as either her budding water skills or her parents’ tolerance level will allow.

But as with any body of water of import, there’s much below the surface, and to apprehend what lies there takes time. The further I have gotten into this parenting gig, the more apt I’ve found the phrase “to pay attention.”  After love, I firmly believe attention is the most valuable gift we can give our children: it is scarce, and it costs.  Thus: to pay.

Children are canny–like dogs, their very existence relies on their ability to read the moods and capacities of the large humans who ostensibly care for them–and they sense when there’s space enough. So it was that the very first night on our week-long family vacation, this seven year-old going on eight (going on third grade/ going on feelings she only partly sees reflected in the faces of her mates/ going on thoughts and an imagination that separate her from most people around her/going on a future that’s both tempting and deeper and coming faster than she’s ready for) broke down and let loose what she’s afraid of. Don’t ever overestimate the confidence of the older child: it’s half-truly them, half-reflection of what they think they should be.

Put another way: whenever my breath is taken away by the precociousness of this girl (her insight/ eloquence/ capacity for well-aimed vitriol/ you name it), I have to remember that each night, when I check on her one last time before I go to bed, I see a child, holding a stuffed animal close to her chest as she sleeps.