We were moving from books ‘n milk to the brushing of the teeth, stations two and three of a five-station, post-dinner nightly journey that ends with lullabies in bed and, for the elder and more insomniac of the pair, rambling conversations about the larger questions of life.

All this rhythm and ritual has been road-tested by years of parenting and a statistically significant number of controlled experiments (no ritual? bedlam!). It’s no simple matter, to ease their young bodies and minds from the hurly-burly of the day into the waiting arms of Morpheus. Before, I would never have put such stock in this kind of stuff–in fact, I would have considered it far more “routine” than “ritual,” and derided it. No longer. I’ve learned.

I had just finished reading Maurice Sendak’s In the Night Kitchen to the boychild whilst the girlchild bore a hole in page after page of her latest American Girl historical yarn.  We were gathering our things, and the boychild was already heading into the bathroom on Mama’s back.  I had been thinking something as I was reading Night Kitchen.  I’m not sure what led me to it, but I made the judgement call that his older sister was old enough to hear a little something about the slings and arrows that fly around the books they read. 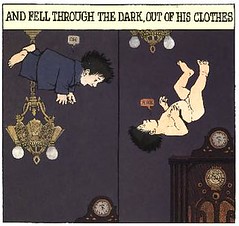 “You know, some folks don’t want kids to read that book,” I say, pointing to Maurice Sendak’s sweet, quasi-Dadaist tale of a boy’s dreamtime adventures.

“What does that mean, ‘Don’t want kids to read the book’?”

“Well, they don’t want school or town libraries to stock the book, and they write letters and wage campaigns for the libraries not to make the books available to the public.”

“Some folks are uncomfortable that it includes pictures of the boy naked.” I assume that’s the main complaint. Otherwise there’s some kind of anti-Oliver Hardy movement that I’m unaware of.  Why every cook in “The Night Kitchen” is a Oliver Hardy lookalike remains one of life’s mysteries.

“That’s crazy!” she says, and I agree with her.

“Yep. Some folks read picture books to kids that they’ve just plucked out of the bath, which they’ve usually taken naked, often splashing next to siblings who are also naked.  I don’t totally get it myself why seeing another kid naked in a book, most likely right after you were naked in the bath, is any kind of big deal.  But lots of people get upset about lots of different things.”

She carefully places her bookmark in her book.  This time it was a torn piece of cloth. Other bookmarks: Kleenex tissue, scraps of paper, swizzle sticks, found wrappers.

“You know, the guy who wrote that had a man sweetie. I’m not sure if he had kids, but I know his lifetime sweetie was a man.”

“Really?”  She takes in info like this with a new depth of interest, I note.

“Yep. Though I don’t think it was that that people objected to. Most of his life most people didn’t know.  It’s just the nekkid kid that upsets folks.”

We begin to walk into the bathroom.  Her brother, ahead of us through this whole process, was now exiting the bathroom on Mama’s back, and headed to their shared bedroom for station four (pick out clothes for tomorrow).

“You know, Harry Potter’s another book some folks don’t want to have in public libraries.” I know I’m bringing out the big guns here.

“What?!! What is it about Harry POTTER?!!”  There is no overstating the degree of passion she holds in her heart for all things Potter. We haven’t even gotten past the third book (at seven, it’s a bit too scary for her, yet) and she’s only just now seen the first movie.  But she would sell all of us off to a traveling circus for just ten minutes inside of Hogwarts.

“Well. Some Christian folks feel like the book, by celebrating witches and witchcraft and magic, somehow is anti-Christian.” Admittedly, I may not have been making the most informed, persuasive case. I was doing the best I could.

“Just because you believe in magic doesn’t mean you’re against Christians,” she says. “I mean, wasn’t Jesus Christ a magician?  Kind of?”

“I think lots of people would probably think that was a very apt way to put that. Plenty of Christians even.” We hold magic in high regard in our family, and right now it stands for nearly all things ineffable, spiritually abstract, and dearly held.

By now she was squeezing just a little too much toothpaste on her toothbrush as she stood on the stool at the sink.

Some opportunities avail themselves, and when they do, we are honor-bound to take them up, and prepare our kids (even if ever-so-gently and by degrees) for the fact that some of those slings and arrows are going to hit them.  Plus hell, I’d already opened the whole Harry Potter is the antichrist door.  Why not finish off by indicting that embattled little penguin family?

“Another book some folks object to is And Tango Makes Three,” I say as casually as I can construe.  (It goes without saying that every good kid’s book that features alternative families, especially those with same-sex parents, is in our family library and familiar to, if not especially beloved by, our kids.)  Interestingly, this time there’s no surprise at all on her face. She just holds the tooth paste tube and the toothbrush in air, and looks at me with that special kind of youthful inquisitiveness that says, “I know what I believe is true. Now I want to hear what you’re going to say.”

I go on to state what is perhaps now, to her, the obvious.

“Some people don’t like it that it’s two dad penguins, and not a mom and a dad penguin.” Brief pause. Then, as if I have to defend the poor birds: “Even though it’s a true story.”

She is older than I know. Because the next statement was hers, not mine.

“I think I know why people feel like that, Baba.”

“Really, Punkin? What do you think?”

“I think the two dad penguins are different than what they know.  And they’re afraid of what they don’t know. And they react to their being afraid by being angry.”

Lord love me I swear that’s what she said. And with that, she put the toothbrush in her mouth, looked at herself in the mirror, and began to brush carefully around her wobbly front baby tooth.

15 thoughts on “She is older than I know”