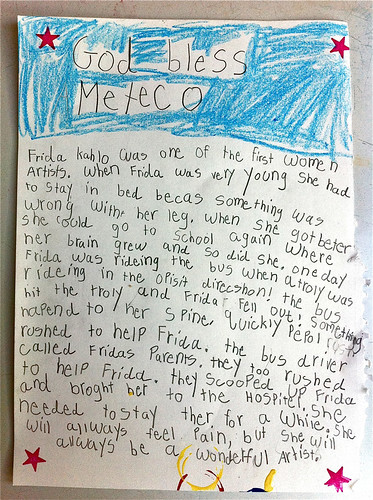 In lieu of something written by me (I’ve fallen and I can’t get up!*), I offer here, for your Cinco de Mayo reading pleasure, something written by my daughter at an unspecified time last month. Â It just appeared in the house one afternoon. I know two of her classmates and chums have visual artist moms who have been volunteering art instruction in the class, and I know at one point — months ago, I think — they talked about Frida Kahlo. Â I asked the girlie where she learned this stuff, and she said there was a book in the class that she’d read.

As written [with translations as needed]:

Frida Kahlo was one of the first women Artists. When Frida was very young she had to stay in bed becas [because] something was wrong with her leg. When she got beter her brain grew and so did she. One day Frida was rideing the bus when a troly [trolly] was riding in the opisit direcshon! the bus hit the troly and Frida Fell out! Something hapend Â to her spine. Quickly pepol [people] rushed to help Frida. the bus driver called Fridas Parents. they too rushed to help Frida. the scooped up Frida and broght her to the hospitel. She needed to stay ther for a while. She will always feel pain, but she will always be a wonderful Artist.

When I read this, I didn’t have the heart to tell her that Frida Kahlo died nearly 60 years ago. Â Other than that oversight, this is pretty spot-on. She will always feel pain, but she will always be a wonderful Artist.

* Since I dove feet first into full-time employment (head first? all in?), I have quite obviously been struggling to maintain anything close to a regular blog posting schedule. Weekly will be my ideal, whereas every other daily used to be de rigueur. Two months into the gig, I thought I was hitting my stride, and I began to, work-wise. But it’ll probably take ’til after 90 days are up — they can’t fire me after 90 days, right? — ’til I’ll find enough equilibrium and time to simultaneously work + be a loving, attentive parent/partner (the non-negotiables) + write here (very close to next in line). I do want to say, though, to the two or three folks still checking in (by god I love ya!), and for posterity in general, that writing here has surpassed being valuable and important to me, and become downright therapeutic — Â irreversibly so. Â I so value the exchange of thought and intent that takes place here, and in all blog communities like this, where kindred spirits sincerely share and help and enlighten. I have received far more than I have given, and genuinely wish I could give more than I have, particularly of late. Â The nice thing is, my conviction that blog dialogs are so vital and valuable led me fairly directly to the day job I have now. Â I’m hoping I’ll wrangle it into some kind of balance soon enough. Thereafter: a bit more about the job, so’s not to keep it in the dark. And then: back to the miracle of parenting these kids.