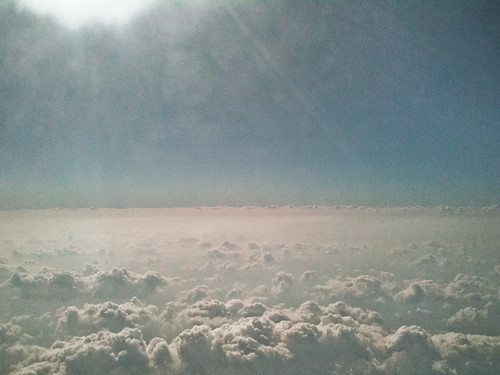 [Ed note: this is the other shoe, the first of which pair dropped on Tuesday.]

Peter Pan’s direction to airborne children heading toward Neverland — “first star to the right, and straight on ’til morning” — always thrills, but for my daughter, the magic really started with Harry Potter. Or rather, it was Harry who cranked it up a notch. The magic itself started long before he came on the scene: it started when our girlie’s custom mix of cells started waking up and banging around, working diligently toward their destiny as the perfect receptacle for her, the one who would wait patiently through several near-miss conceptions then a miscarriage, before dropping effortlessly into my beloved’s womb, then our arms, right when we needed her most. She knew.

We all have special powers. My job as a parent is to pay close attention, and notice as many of my childrens’ as I can, that I may clear the path ahead–when it ought to be cleared. Oftentimes the path-making is their job, in which case my job is to remove myself to a proper distance off in the underbrush, sit on my hands, and bite my tongue. Guess which job is harder.

One of my daughter’s powers is her Olympic imagination, from which I’d bet she draws a majority of her day’s enjoyment. We’re fortunate enough not to have stepped on it too much, though its care and feeding can pose a challenge. Leaving her alone to her own devices a lot helps a great deal.

Also helpful is play-acting with gay abandon, whenever possible. Grandma, who cares for her every Wednesday, is an agent provocateur par excellence. A playwright and a theater director of note, she never saw a flight of fancy she didn’t want to hop on board and ride to China, or the Outer Hebrides, or Nicaragua. Like mother like daughter, as it happens, so the kids clock countless frequent flier miles with Mama, too. And since Baba is usually talking to at least three imaginary people in her head at any given time (they’re the only ones who listen!), the house is a cluttered aviary of fancy.

Reading great stuff to her helps a lot, too, of course, and this is where Mr. Potter comes in. The world of HP, as it is fondly referred to in our house, is densely filigreed with gothic detail I know only in snatches.’  Long ago Mama distinguished herself as a master of the character voice, British accent sub-specialty (trained actors! can’t beat ’em!), and so when it came to nightly HP readings, Baba was summarily kicked off the couch. By the girlie. Because the content of HP is still a bit too thrilling for the younger brother, even after being selectively edited by Mama, he and I both repair to his bed for the bedtime lullabies and cuddling which, thank the heavens, haven’t gotten old in four plus years.

I hasten to note that we consulted with other parents and the girlie’s teacher before we cracked the ponderous doors of Hogwarts. Various sensible dictums were dispensed, such as: one book a year, tagged to her grade (Harry Potter and the Sorcerer’s Stone in 1st grade; ‘ Chamber of Secrets in 2nd, Prisoner of Azkaban in 3rd, and so on.) She’s in her last leg of 1st grade now, and we’re nearing the end of Azkaban. Clearly we’ve revised the strategy.

Still, she doesn’t get to read a book on her own ’til after Mama’s read through it, editing liberally on the fly. Not that those edits go unnoticed. Every moment of radio silence, every euphemism is a known entity.’  At first–way back when I got to read HP–she would give me withering looks seconds into a brief pause, while I searched my tired brain for a suitable substitute for rabid, three-headed dog or unicorn blood-drinking vampire or car-tossing, mewling spider.

“That’s not what it says, Baba,” she would say when, after a pause, I would describe an “adorable, ONE-headed dog” or some such. For the first dozen times her uncanniness would stand my hair on end.

“How do you know, sweetums?” I’d ask, usually unable to mask my incredulity.

“Because it doesn’t sound right,” she’d say, which would be right. The only euphemistic substitutions that have gone unremarked have been those that seamlessly mimic the word choice and tone of the work. Not easy with so formidable a literary landscape as that of HP. My two-bit pseudo-Anglicisms, ruthlessly parsed. By a five year-old.

It didn’t take too many repetitions of our argument–some of the stuff in there was too scary, period; scares even us–before she conceded. (A) She knew parental redaction was the price of admission to Hogwarts. And (B) What she heard was thrilling enough that her imagination more than filled the lacunae. When she goes to read any of the books she’s heard (which she’s done twice), she knows when to skip, down to the scene or (in rare instances) the whole chapter. This sneaky, custom process only brightens the nimbus surrounding the whole experience.

Since the first HP some year or so back now, Harry, Hermoine, and Ron have become fixtures around the house. I made a Hogwarts cake for the girlie’s birthday in September, aided immeasurably by the architectural prowess of several other partygoer parents (highly recommended! what started out as my being behind on the cake ended up being a hugely entertaining project for the grown-ups, as the kids played). Last Halloween, she was Hermoine.  The story of her school’s Halloween parade, in which her Hermoine was joined quite unexpectedly by a schoolmate’s Harry, simply can’t be repeated until she is old enough to consent to its broad distribution. Suffice to say that my daughter is a method actor, and she takes her work very seriously.

When I cuddle with her as I tuck her in at night, I have to take care not to squish Hermoine, who is often sleeping over. Ron and Harry of course are laid out on the floor on a blow-up mattress. The other night I had to set three extra places at the table–a tight squeeze–not for Elijiah and two of his lesser-known chums, but for (you guessed it) Harry, Hermoine, and Ron. Fortunately they were light eaters.

But I met my Hogwarts Waterloo this past weekend, when I was trundling the kids into the car for their gymnastics class (Baba’s got a full-time J-O-B? Kids receive long-neglected enrichment activities!).  We were out of the house and at the street with just enough time to get to the class. I opened the car door, the lil’ peanut clambered in, and his sister pulled up to a full stop on the sidewalk, wide-stanced, one fist on a hip, the other clutching her Nimbus 2000, parked between her legs.

“I’m going to ride my broom to gymnastics,” she announced. She hadn’t dismounted the poor thing, which was looking very much the worse for the wear since its debut at Halloween, since just after breakfast.

“Sweetie, you don’t know the way there.”

Silence, as I dully plot my next move.

“I’m not sure you know how to ride that thing well enough to be safe through the city streets.”

“Silly Baba, I’ll be flying in the air above the car.” It seemed an effort for her to refrain from rolling her eyes.

We went back and forth this way for a good ten minutes: me standing at the open car door, her on the sidewalk, straddling her Nimbus.  All the while her little brother sweetly drew pictures in his car seat, taking mental note.

You see she is wise to a great many things, this child of mine, and not simply in the ways of magic as conveyed by the sages in the house of Gryffindor.  Another is that her parents are loathe to dispute the presence of magic both in the world and, far more importantly, in her imagination.  Figures such as Santa Claus and the Tooth Fairy are magic personified.  We meet her direct questions about them (their comings and goings and leavings) with a now familiar prevarication.  We’re fuzzy on specifics.  But–and I credit fancy-flying Mama for this–we tell the truth. “He is the spirit of Christmas,” we’d say, meaning it whole-heartedly.

How else but with magic do we explain the fact that for her first six months, she was preternaturally self-sufficient, and slept like a baby– that is, in the utterly fictitious sense of that phrase: she slept through the night, night after night.  Those days and nights were filled for us, to one degree or another and ultimately to overflowing, with the life-bending work of seeing my nephew and his family through his illness and death. Then, a week or two after we no longer needed that sleep to find our way in the pitch-black of the day– week or two after that chapter of my nephew’s work here was done–she woke several times nightly, and cried, and cried.  Like a baby.

How else do we explain so many other things between that time and this: in an airport gift shop, just before I get on the plane where I write this, a rack of nameplate key chains catch my eye. In the moments while I await my turn with the cashier, I see his name, Erik, with a “k.” The rare, Norski spelling; his spelling.  I touch the keychain, and see it’s “solar powered,” so when my finger momentarily blocks the light sensor, it blinks. Erik, it beams; Erik Erik, Erik.

I have come to believe that loved ones gone communicate only when it’s needed; quite obviously I have not needed him near so much as have the rest of us he left here.  I am grateful that he spends what he has where he has. But the flight is turbulent, and as it bumps and jostles I am as placid as the bony desert landscape beneath me. As a very sweet little gift, he found a way–his way, with a fun, cool, techie gadget–to let me know. Over Canyon de Chelley and the Navajo Nation, I thank him, and say my usual things to him about his family and their journey. I don’t hear back from him any more than I need to.

Enchantment by any other name would smell as sweet.

Back on the sidewalk at the car, my daughter is in a motionless dance with me. She watches the clouds pass over my face, studying me as I measure my words.  Just when I have given up hope that I will find any way to induce her into the car short of hauling her up by the armpits, she concedes that she could polish some broom-flying skills at gymnastics– balance, agility–and accepts my proposal that she practice in the field outside the gymnastics place, after the class.  I accept, with caveats, her counter-proposal that if she has trouble with the broom there, maybe we can find a magic shop that will sell us an owl. That’s the conclusion we’ve come to outwardly.

Inwardly, I imagine, she has gathered what she needed to gather that morning. That I will not say she cannot fly. I cannot possibly bring myself to say that.  Half because I can’t bear to put even a hairline crack in the crystalline vessel that holds her imagination, half because: who am I to know? If anyone could fly, held aloft only by the power of their will, this girl could.

8 thoughts on “Straight on ’til morning”