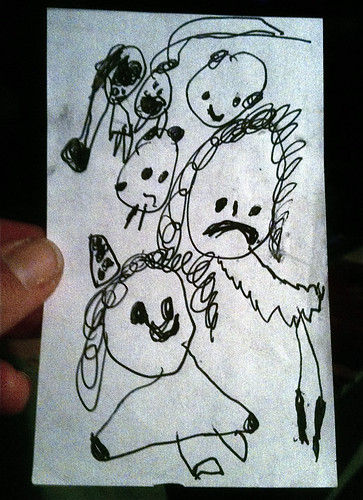 A potpourri, here. No thread, just the will to stay up well past a sensible bedtime to say something, anything.

Have I shown you this image before? If not, I should have. It’s vintage, meaning my daughter drew it years ago, so long ago now that I don’t remember when. Yeah, I know, she’s five, bearing down rapidly on six. How can a parent manage to blur so few years? Don’t answer that. Unless you’re inclined to be sympathetic. If you’re going to blur your kid’s years, I think these early ones are strong candidates.

Comedy/tragedy, that’s what I think of when I look at this drawing of hers. Complete with a clutch of muses and Mephistopheleses peering over their shoulders.

That’ll do it, eh? Life, boiled down to its nub. Back/forth back/forth we swing between those two poles, comedy/tragedy. Usually we flutter around the one for way too little, and we’re wrapped around the other for way too long. Or at least that’s how it tends to feel.

So much ado of late, as I have intimated obliquely from time to time. The irony of a pro bono, largely personal narrative blog: when life gets chock-a-block, the source material is enriched, but the time in which to render it is impoverished. Â Since the other major distinguishing feature of pro bono blogging is that it only happens in the interstices in the first place. For those of us not independently wealthy and/or with a partner (if such we have) working in high-ranking corporate what have you, rather than, say,Â community-based arts. Not like I’m complaining. Just explaining.

Take this image above: cameraphone did it! Because why? Because the means by which to transfer images from actual camera to computer is currently quasi-inacessible! Has been for months, really! As is the computer with which any given image is massaged into presentability. What’s behind the quasi-inacessibility of my computer is the same culprit munching up the odd bits of discretionary time I used to exploit to mosey over here and chit-chat with you. I hesitate to mention the culprit directly, since it couldn’t possibly be more bourgeois-pedestrian. Also, when I looked at Dooce for the very first time, she was sharing intimate details about her own such travail/adventure, and I thought: Geez! What narcissism! As if anybody gives a rat’s arse about this!

That was long ago, in my earliest blogular peregrinations. Now I’m hep to the fact that, if conveyed with panache, even a rat’s arse can be attention-worthy!

Okay, it’s a house remodel. There, I said it. I’m wrestling with a steady stream of the un- and modestly-skilled labor parts to cut costs. Thus the paucity of time.

There. Now please don’t tease me over the bourgeois-pedestrianosity of it all. Â I’ve kept it under wraps for months, and only now spilt the beans because it’s gotten so’s I can barely post anymore. Don’t worry, I won’t post before-, during-, and after-pictures. Though eventually the background of the interior behind my kids will expand to something besides the sweet ATTIC we’ve been living in for the past five years. Â Yes, an ATTIC. Long story.

We’re entering the final stretch, meaning maybe a month more of this malarkey and we’ll be back to our regular, middle class, no one’s currently battling a terminal illness or grieving in the immediate (read: one year) wake of a loss woes. This is not a joke, but precisely how I measure woes, particularly of the middle class variety. Terminal illness and/or grief following loss. After all our non-woeful, in fact on the contrary quite blessed malarkey, I will have desk, tools, and the return of the intersticial time.

Also, don’t tease me for not mentioning ’til now that this blog was chosen by a panel of writers from Parenting magazine and BlogHer to be among this year’s “Must-Read Moms,” an annual editorial feature honoring what they consider among the best parenting writing online. Hot diggity! And also, more to the point, Holy crap! I wrote a piece for the occasion, printed here. Other “Must-Read Moms” are:

It was an incredible honor, after also initially being an incredible surprise. The piece is in their September issue, page 152 if you must know. I reckon since it’s September as of today, I ought to get around to telling you. Do look at those other blogs, too. There’s something unique and compelling about each one of them (of course they’re all well written), and it’s an honor to be counted among them.

The proper thing would be to roll out a welcome mat to new readers here from Parenting (hi!). Thing is, the issue hit the newsstands in mid-August, as did the announcement (at the BlogHer conference in early August) and the online version. Ah well. I’ve said before I was a “slow blogger” (yes! it’s a thing!), masquerading as an ordinary one. Yet and still, I have a welcome mat post in my head, and hope to get it out of there and onto this blog one day before we’re too far into September and before the guests have either drifted along to another party, or settled in and made themselves at home on their own. Meantime, there’s always the Best of LD page.

Since I’m slow in the first place, and hobbled by so much ado-ing, it may take me a while longer to address the other, woefully backlogged posts which are pecking away at the back of my mind. Such as follow-up to the whole The Kids Are All Right hoo-ha that was all wild-firey at the beginning of the summer. I speak here of the reaction to the film amongst my sistren, first, and its impact, perceived and real, farther afield. Will I ever, ever have or muscle the time to transcribe my interview with director Cholodenko and lead Bening? Time will tell. Meanwhile at least various of my close personal friends now know what they said. So there’s that.

Also pecking away back there is some kind of account (photographic even!) of my enormously full trip to NYC. Â You can see where the estrangement from a computer on which I can edit photos is a bit of a sticking point here. I’m also still ruminating on something Mr. Sinclair Sexsmith asked, during the inordinately generous and Â extremely memorable Brooklyn tour she and her love Kirsten gave me at the close of my whistle-stop NYC trip. She even followed it up with a cajole to post on it: how does one get to fifteen years in a relationship? I do have some thoughts other than, “Location, location, location!” Â Though that’s what bursts into the brain first off. Â I mean, how do you disentangle the seeming tautology of “Pick the right one!” But that’s what I think. Or rather, the right one picked me. Sinclair, I swear I’m gonna write that one up.

Flowing under, over, around, and through all this pecking are thoughts of five years ago this time for me, occasioned by the remembrances about Katrina. The world was underwater in my own family at that time, though figuratively, not literally. Big stuff. My sister and her surviving son had just left to join her husband who was working in Copenhagen, five shock-filled months after the cancer death of her oldest son, at ten. Â The pitched, nine month-long battle for his life, punctuated by the loss of it, changed all of us. Dramatically, and permanently. My daughter Â (and my parenthood) was born right into the midst of all that. After my sister left at the end of that summer five years ago, I felt like a sheep dog with no flock, trotting to and fro in an empty field. With my beloved, equally in shock, and our just-one year old miracle of a daughter, I moved to the house we are now, finally, making our own. Â A great deal about loss, family, and home are inexorably linked for me, and the transformation of this building — its growing habitability, after years of struggle — brings back the dark, foggy days when we began living in it. It’s a co-housing community, by the way, and I’m hugely proud of what we’re up to here. I may try to write about that, now that I know for a fact that we are indeed here to stay.

Also on my mind is the anniversary of my mother’s death, seventeen years ago today. That says a lot, that such a huge event can be jostled by so many other contemporary matters. And it was life-changing in its scope too. What a vast scope, life has, that one such huge event can actually be eclipsed by another. Change, change, and more change. That’s what all of life is made of, and the hinge season of summer-into-fall makes this all the more vivid. It was a fitting season for her to die in. Winter was a relief. Finally, I thought: the rest of the earth (I was living in Minnesota at the time) looks like how I feel. Â My nephew died in spring. Impossible.

Lastly, and happily: today’s our girlie’s first day of first grade. Nuttin’ much. Just the only first day of first grade she’ll ever have. But let me tell you. It’s also our first back to school day. And there’s a heap of difference between “back to school,” and “never ever been to school at all, ever, before today.” That’s what we had last year. Mama wept, just after our girl disappeared into the school hallway from the playground where the Kindergarteners had gathered in excited clumps. This year, I expect dry eyes. We’ll hug her good bye, hug each other some congratulations, maybe grab a cup of coffee and chillax with the other parents. Find some jittery freaking out Kindergartener parents and be kindly to them. Then hoist the younger brother on a hip, and head back to work.