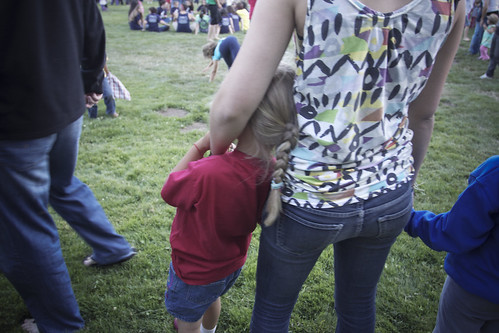 No, not what you think. Susan Sontag’s legendary essay will stand unamended by this wee filing, which is instead a stolen out-breath following the close of our girlie’s first summer camp. [And yes, another weekend went by without a photo posting; it was preceded by another week in which the S.S. LD continued to rock around in frothy waters. Â Which is to say that adequate space and time in which to do this here remains juuuuust out of reach, even as I see the where and when of its return on the horizon. Thanks for sticking around during this wet/dry time.]

Ã€ la Sontag’s camp notes, I’ll number these. Probably won’t get to 58, though. Which of course is good for both of us.

1. Girlie’s camp was FANTASTIC; she was a zealous fanatic about it within about a half a week.

2. They didn’t tell me she was going to grow up some more during it, though. Such as, during an overnight sleepover.

3. No, I didn’t position myself behind a moveable bush outside where she was sleeping. Though I threatened to.

4. It’s been voted the Bay Area’s Best Jewish Day Camp, and I can see why. Not that we have any experience of the Bay Area’s Worst Jewish Day Camp to compare it to, or for that matter any Day Camp whatsoever, Jewish or no. But it’s easy to see this camp has created a helluva community over the 20+ years it’s been operating. Â Several of the girlie’s homies from Kindergarten were alums of the camp and headed back this summer, and when we got first-hand testimony from one of ’em, plus her ma, who had been a camper for years and then a counselor, we were sold. Music looms large in it.

5. Among the things they don’t tell you about this raising kids thing is, after one year of public elementary schooling, you will be tossed back into having to think up or pay up for something edifying/ not illegal for your kid to do during the daytime hours when you’re at work. For some reason we didn’t see this coming. The rest of youse: save up! Â Gradually skim it off of the kid’s school year lunch money if you have to.

6. After the second belly-flop delivery, I gave up trying to convey, in shorthand, my warm and runny relationship to Jews and Judaism. In casual afternoon conversations waiting for our kids to be delivered by the wildly enthusiastic counselors, one person or another asked, off-handedly, “Are you Jewish?” In response, I would burst out with something to the effect of, “No! But I’m a big booster!” Once, in a perverse gesture of solidarity, I even held my hand up in a Vulcan salute. Why I’ll never know. Also, it did not have the intended effect (“We’re all brothers, sister!” or some such). Instead, it inspired a kind of deadpan stare. (Hey! Had I read this web page first, I mighta helped pry my foot out of my mouth!)

7. My daughter now knows almost as many Hebrew words as I do, and can pronounce them better. Â This, even though I’ve worked off and on for over ten years with an editing client (and now friend) who’s a prominent Jewish Studies scholar. I try not to resent my daughter.

8. The counselors greeted every camper who drove up with a rousing welcome to camp. Cars would drive up, the counselors would crowd around the door, open it, and then bellow out their morning cheer. Probably frothed up 90% of the little campers into a ball of happy anticipation. Except ours was in the 10% (or 5?) who was overwhelmed to the point of tears several mornings. But did this deter her love of camp or its counselors? No it did not. She didn’t want us to talk to the counselors and specifically ask she not be given the full-throated welcome, so instead we hatched a system whereby she would wear the headphones I don when mowing our lawn, or noise-polluting the neighborhood with the leaf blower. She also fashioned a little white flag of surrender. Â From the second week on, as we’d approach the synagogue,Â she would hastily position the headphones on her pig-tailed head, pick up the flag, and wave it feverishly in the faces of the cheery counselors when they swept open her door. Did this get them to dial down the morning’s sonic blast of welcome? No it did not. Not until the very last day. (“Those were headphones?! To keep the sound out?! Ohhhhhhhhh!”) Fortunately, by then our girlie had already begun to break out of her chrysalis. Â A job well done on everybody’s part.

9. At the Shabbat that closed the camp, all the families joined their campers in an enormous field in a park in the hills, and it was a sight to behold, hundreds of young people, bounding and cavorting inside this huge container of loving, energetic spirt, of ruach. When the counselors led everyone in rousing renditions of the various camp songs, our gal hopped and danced and sang out (or mumbled when necessary) for nearly every one. Declaring for each, “This is my favorite! This is my favorite!” As if she’d been singing them for years.

10. The evening closed with a huge friendship circle, made up of every camper and counselor and family member. Â I was hastily gathering our picnic dinner items in anticipation of a challenging departure — I was a theater widower and thus solo parent that night, the beloved off at her show’s second weekend performance — when I looked up to see a young woman sweep by and call out my daughter’s name, holding out her hand. My daughter lept up, clasped her hand, and off they sailed into the scrum of people with nary a glance cast back over a shoulder. I scooped the boy child and hastily followed, and though we caught up and stood right behind her, we went nearly completely unnoticed by the lil’ monkey. Â  All that camper-counselor affection — mutual, sincere — heaped up in such a short time. Â All this belonging and trust in our girl.

We had hoped she’d love camp, but had forgotten that this would entail loving people there, too. Â That in fact it would be the people that would make it what she loved. And that they would come to love her back. Â As our children move in ever-widening circles, I reckon we will learn this over and over again. It’s a lesson, I suspect, more than all others, that will get me up and dancing on my feet, declaring, “This is my favorite! This is my favorite!”

4 thoughts on “(Brief) notes on Camp”