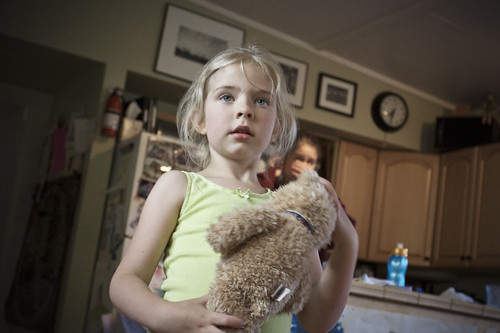 After dinner she tossed the teddy bear in the air over and over again, catching it maybe 50% of the time at best. Said, with a seriousness available to only a five and a half year-old, that this was her new goal: to toss the bear up as high as possible and try to catch it. Â That her dubious success rate should be anything to be aware of, much less embarassed about, is beyond her ken.

I should also note that this goal sits side-by-side with the goal of reading thirty chapter books before the end of the summer, and mastering the proper deployment of the term “infernal.” I might be exaggerating a bit about the number of chapter books she’s looking to polish off this summer.

This mind-boggling juxtaposition is surely one most precious jewels of childhood.

We are at the cusp here, a time when self-consciousness begins to creep in, stealthy, on little cat feet, like Carl Sandberg’s fog. Except unlike that fog, I suspect her self-conscisousness won’t sit on silent haunches and then move on. Â If she’s like most homo sapiens, it will sit on silent haunches and settle down for a lifetime. Â And I’ll have as much ability to keep that self-consciousness at bay as I would the fog.

The mixed blessing of consciousness (period; not just of the self) is that it’s a portal. I would welcome her self-awareness, for instance; ultimately, her self-knowledge will be one of her most valuable gifts to herself. Â But not too soon; not too soon.

Every parent will tell you this, it’s not new. Yet it catches my breath nearly every day: watching a childhood unfold right before your very eyes is a daily exercise in letting go.