We took a hike in the woods recently, the kids and I, while Mama was out of town for some hard-earned R&R. Yes, things started out a little bumpy (see Sunday’s post), but before long we, meaning Baba, had regained our composure and had a delightful time.

We’re nearing the end of our loop through the woods when we espy some rustic bathroom facilities, which, given the preponderance of poison oak (cf Sunday), are a welcome relief. (In the big bag of stories waiting to be told, if only I could fling discretion clean out the window, is a gem about the mother-out-law and some poison oak on her honeymoon, and all I can say is it is the cautionary tale to end all cautionary tales.) Â We make use of the park outhouses and rejoin the fire trail, now dotted with Sunday afternoon strollers, joggers, and mountain bikers wending their various ways back home.

Right as we’re about to join them, what should round the bend but three caballeros on three gorgeous horses. They dismount and lead their steeds to drink from a nearby trough, and we can’t do a thing but stop and stare.

The man nearest to us notices the girlie’s rapt attention, leans over, and asks her if she wants to ride his horse.

“Sweetie, that was a generous offer,” I say. “Would you like to sit up in the horse’s saddle? Just for a moment?”

The man is ready to just hoist my slight-boned, Highly Sensitive Child right up into the saddle, but I stall with a few niceties, like what my name is, what the girlie’s Â name is, and what’s your name while we’re at it? Just so I can tell myself that at least I knew the man’s name before she was up in the saddle. Not like his horse is going to bolt down the track with its tiny petrified rider, never to be seen again, but we need only refer to the drama of our earlier stroll through the poison oak hedge to see how ripe Baba’s imagination is.

Pablo is his name. He seems like a very sweet dad type, or a very sweet uncle at the least. “Mucho gusto,” I say, emboldened by the Spanish he and his compadres were speaking to each other as they rode up, and held back not a jot by my own persistent butchery of this beautiful language. It’s my state’s first legal language; I figure I am honor-bound to at least do the best I can. Horse’s name? Tick. Â She had a bad case of them when she was young once. What ranch? Up in El Sobrante, just north of this park. How old? About three; Pablo has had her since she was eight months old.

By now the girlie is as ready as she’ll ever be. And still rapt.

Pablo shifts the reins around in his hands, and whoosh! my five year-old daughter is up on her first horse. Â From this perch she is as high up as she’s ever been on just about any of her city slicker playground equipment, and higher up than in any tree she’s climbed (not a big tree climber, this one). Â Except a tree doesn’t make blustery noises when it blows air out its copious nostrils, nor shift its hefty weight forward and backward as it paws the ground, nor shake its auburn mane back and forth.

The girlie’s eyes bug, but no squeals, not even a whimper. Â Pablo has one hand steady on the saddle’s horn and the other on the girlie’s little back.

“How do you like it up there, sweetie?” I venture.

After a loooong moment, during which I attempt to measure the value of her confronting a new experience against the indelibility of an early, horse-bound trauma, I ask, “Would you like to get down now?” 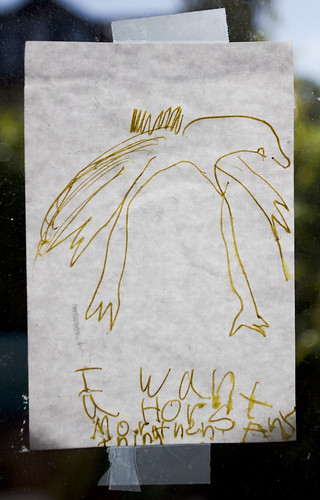 Pablo suggests she take in a nice, long, deep breath. Â I do, at least, and I feel much better afterward. Â Got to remember to do that more often.

“I want to come down now,” she says. Â She’s looking at me, but I know it’s Pablo’s job to take her down. Plus I’ve got a little brother on my hip.

She plasters herself up against my legs as soon as her feet are on solid ground, never taking her eyes off Tick, who’s now rubbing her sweaty cheek vigorously against Pablo’s back. Â I smooth my hand over the girlie’s chest and hold her close as we continue to chat with the caballeros a bit more. Got to end on a good note: everyone who’s taken a dog training class knows that.

After one last round of thanks, Pablo et al. mount their horses and head them back north up the trail; we head south for the parking lot.

“How was that, sweetie? Scary? Scary in a bad way, or scary in a good way?”

“Scary in a jiggly way,” she says, which she follows with the faintest of smiles.

Back home she falls to reading and drawing, per usual, and all seems normal. Â It takes me a day or two to notice the note, above, which she posted on the front door. Â The text on it reads: I want a hors mor then any thing.