Many of you watched or heard the President’s State of the Union speech last night. Â So did my daughter, much to her great thrill (“We’re staying up late! To watch the news!” she said, with a frissonÂ of excitement). Â Throughout the speech, though, she was left with a great number of quesitons. Â Some were easy to answer, some were stumpers. Judge for yourself:

She decided to try to take notes on the whole thing, but this proved more challenging than expected.

“I can’t write as fast as he talks,” she said, still utterly cheery. (We were staying up late! To watch the news!) Â Still, she made a valliant effort. 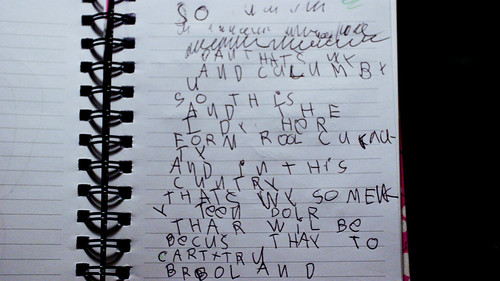 “I just heard him say the word ‘So’!” Down it went on her notepad. Â I saw a whole sentence I could have sworn I heard President Obama just said. But after a while, she scaled back her goals.

“I’m just gonna write what I catch up with.” Here’s hoping that technique retains its usefulness when she wakes up in another dozen years to find herself slumped and drooling on her notebook while a lit professor prattles on about Finnegan’s Wake.

She did catch up a bit, but only with fitful success. Before long, she had given up notetaking, and was filling in pages in a “Name Dictionary,” which featured the first names of nearly every kid in her Kindergarten class, plus sundry family members. Â It ended with a couple more non-Kindergaren names we knew, and some fictional names just for good measure. 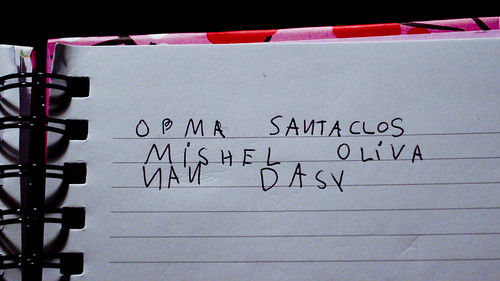 Was it an effective speech, in her view? Hard to say. But I look upon the juxtaposition of “Obma” and “Santa Clos” quite favorably.

8 thoughts on “Some SOTU notes for your edification”