We are at Preschool Graduation Day (PGD) minus one day and counting. Midday Wednesday, Â the beloved and I will be all teary-eyed, watching our girlie standing in a line with a dozen or so of her little mates, singing songs of joy and peace, accompanied by those hand gestures that are such a fantastic nemonic device for the young, and just insufferably adorable to the old.

Our daughter, by contrast, will be dry-eyed and thinking about the next verse, or about how her undies keep riding up her booty, or about how isn’t that a Steller’s Jay chattering up there in the tree?Â Maybe she’ll just be thinking how sentimental her parents seem to be, and wondering whether we’ll be carrying on like this for every other graduation, too. The answer to which question would probably be: yep.

After I picked her up from preschool yesterday (one more day to go! have I mentioned?), I suggested we take a quick jaunt to her new elementary school, which she okayed immediately and even with a touch of frisson, if you can frisson at 4.9 yrs old. The pretext for the visit was for me to test out the drive time, to & fro our home. Sure, Â late at night — andÂ more than once — I’d already done that. But did she need to know?

We pulled up to the school, and of course I immediately proposed we get out and case the joint, quick-like. Â Which she again green-lighted immediately. Â The two front entry doors were locked, a sign taped to the inside of each informing would-be entrants that the floors were freshly waxed. Â I hoisted her up and we pressed our faces to the glass. Shiny, empty, quiet, checkerboard-patterned, elementary school floors. Â The bulletin boards lining the halls were naked but for the colored construction paper that will serve as backdrop to the next year’s PTA meeting announcements, Unified School District notices, kid art, teacher updates, and you name it.

“Your stuff’s gonna be up on those walls one day, Sugar Lump.”

We both stare a bit more.

“Think we should check out the playground maybe, since we can’t sneak inside?”

She’s been here once or twice before. That is, physically, with her mama and me. I’ll never know how many times she’s been here already in her imagination.

We circled around outside to test out the playground equipment. The upper playground was as deserted as the interior of the building, but the play structure was fenced off Â in anticipation of the reinstallation of that spiffy foamy rubber stuff that the kids of today drop onto when the inevitable happens and the spit on their palms loses its stick on the bars.

In one of the doorways, a man in a navy-blue jumpsuit scratched at some guff on the paint with a tool. Â Naturally I had to stroll up and introduce myself.

“We’re checking out the digs here. One of us is going to start school in a few weeks. I won’t tell you who, but I will tell you she’s pretty excited.”

I held out my hand and told him my name. He did likewise. Â I had already read it, in cursive, on the name patch on his jumpsuit, but when we both heard it out loud, I turned to the girlie and shared a wink and a smile. It’s the same name as one of a trio of animal friends who keep figuring in our nightime stories. Gerald the Giraffe.

He told us he was the school’s custodian.

“So Punkin, Gerald here keeps everything here ship-shape around the school. You’re gonna see him all the time, taking care of business.” She eyeballed him, impassively. One down, 293 more new community members to go.

After a bit more chatting (mine and Gerald’s, natch; the girle just slowly twisted herself around my leg and lodged her face into my stomach from time to time), I excused us and we examined various other features of the playground. Hopped on hopscotch courts. Sipped at water fountains. Â Determined which of the two faucets at the fountain was easiest for her little hand to operate (the left one, by far).

On the way out, I saw the steps leading to the “multipurpose room” or theÂ “cafetorium” orÂ whatever they call it here (soon enough I’ll know). I led us up, and again hoisted the girlie to the glass.

“See in there? That’s the main room where everything happens. You’re going to eat lunch in there, and there’ll be assemblies, and all sorts of things. When there are school plays, they’ll happen right there, on that stage.”

“Really, Babi? Can I be on there sometime?”

“Absolutely.” (To self: Just don’t feel bad if not too many of Â your chums show up for your one-woman Waiting for Godot. Mama and I will be right there in the front row with the video camera.)

We both marveled at the stage. Â Me, watching a lap-dissolve flurry of images: first school play, first holiday musical, PTA meetings — some tense, some worrisome, some relieving, all dotted with (I expect) an increasing sense of belonging. At the end, I see a girl much taller than this one now, walking across the stage at her elementary school graduation, quasi-urbane and ready for middle school. Or as ready as she’ll ever be.

She, perched on my knee and propped under her armpits, peering through the smudgey window at the soft-lit auditorium stage, seeing in her mind’s eye: what? It’s only visible to her. Â Whatever it is, I get the sense she’s been picturing it for a while.

A few days ago, we had been talking about her upcoming transition. Â A bit tangentially, as I recall, but that’s what the topic had been getting at. After a few moments of silence, she said, “I love doors.” It made no sense to me. And then she continued, “I love doors that lead to something I don’t know. I love adventure.” 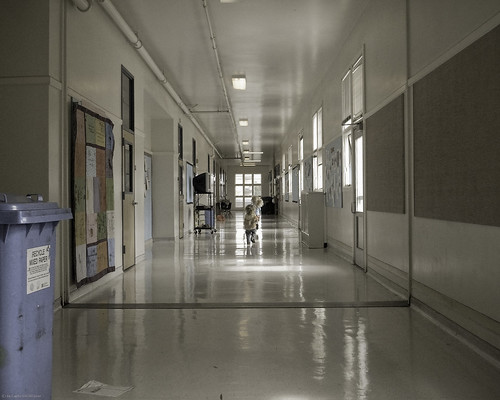