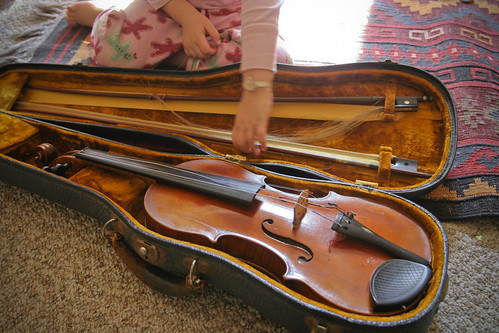 Some days it’s all you can do to hold it together, they’re driving you so nuts, and you step into a nearby room for the quiet opportunity to drop your face in your hands and attempt to recover equanimity before one of them scampers in and bumps the mania/sadism up a notch. Other days, they take you utterly by surprise.

We had a little extra time at one point yesterday — her brother’s nap, we didn’t have to go anywhere just yet. I had been at work at the computer, and the lil’ monkey wandered up. Not so lil’ anymore. I was preparing to foist on her a plan to watch some Jaques Pépin cooking videos which I’d recently found online.  We’d had a dandy time over the weekend happening upon his show on the TV set,  what with “Jaques” being the name we give me when I do the fake French accent, and what with the girlie really hitting her stride lately as a sous chef.  Okay so mostly we make pancakes and biscuits and cookies.  But still.  For the whole show, she insisted I stay in character as Jaques.  We learned a lot.  Thank heavens she has a seemingly photographic memory, because we didn’t have a means to pause the show and scribble down the recipes.

So there I am, poised at the computer, and she walks up to me ready to play.  I’m prepared to announce that I found more Jaques on the computer, when she says, breathlessly, “Baba, I have an idea!”

“What?!” I am almost certain she is about to say, “Let’s watch another cooking show!”  But instead she says:

“Let’s look at your mama’s violin!  We haven’t done that in a long time!”

It’s something she knows we can only do when her brother’s napping, at least so long as he is likely to ram a crayon into one of the f-holes.  You can see by the dilapidated hair on one of the bows that it’s already sagging under the weight of years of benign neglect.  I can’t wait to (a) afford to have it thoroughly repaired, and (b) watch my daughter or son pick it up and play it.  Given the frequency with which the girlie asks for violin lessons, this may actually even happen.

“That’s a great idea, sweetie!” I say, and up I pop to pluck the violin case from its safe berth at the top of a closet.  Down it comes, I open it, we breathe in the aroma of rosin.  I breathe in the scent of memory.

This object holds my mother for me as much as any single thing could.  When she shuttled my sister and me around our suburban youth in that huge gold Plymouth station wagon with the fake wood siding, it was all classical music, all the time on the radio.  She tried to interest my sister and me in the instrument that gave shape to her youth — and whose abandonment, for a more financially secure career path, she seemed always haunted by.  All I remember were the hairy legs on the gal who came to teach us, and what seemed to me to be the faint aroma of marijuana about her.  Or maybe it was patchouli.

At any rate, I couldn’t sit still long enough indoors on a summer’s day, and I doubt I lasted a season’s worth of lessons.  Now that I know what I know, I can’t imagine the blow that must have been for our mother.  Another of the 5,000+ things I would tell her that I regret.  If only I could.

Still, when I hear the sound of a violin I might as well be hearing my mother’s voice.

My daughter picks up the violin and carefully places it in her lap, pulls out the bow and draws it scratch scratch across the few strings taut enough to generate a sound.  I pick it up and show her how — if she were holding an instrument sized to her — her chin would go, thus, and her elbow would be held out, thus.  The bow is held in the fingers this way: thumb here, pinkie there.  She watches as carefully as if I were filleting a fish, or de-veining an orange.

I hand her back the instrument, watch her do her best to repeat the posture, the gesture.  Look at her little fingers on the fingerboard, the same fingerboard my mother’s fingertips danced around on, just a moment ago.  Just fifteen, twenty years ago.

Which object, I wonder, will speak as eloquently of me to her, long after I’m gone?  I have no idea.  It may never be an object.  But I tell her, and her brother, every single day, how very much I love them.  Because I know keenly that one day I will be as gone as my mother is now.  Meantime I write and write, hoping that a tumble of words might suffice.

7 thoughts on “Other days, they take you utterly by surprise”